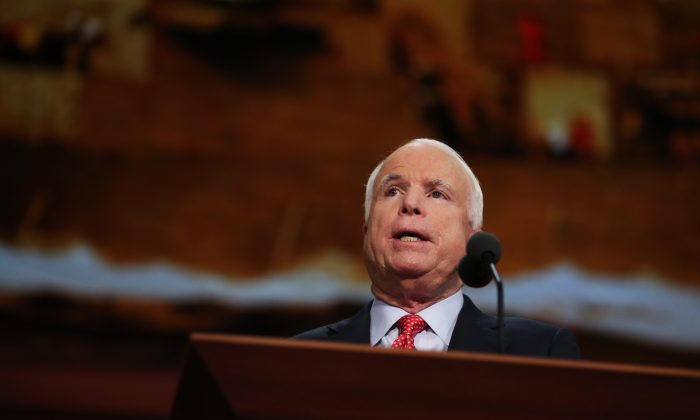 McCain on Benghazi: Sen. John McCain said on Sunday that the Obama administration covered up details regarding the Sept. 11 attack on the U.S. consulate in Benghazi.

“I’d call it a cover-up in the extent that there was willful removal of information which was obvious,” said McCain, a Republican from Arizona, on ABC’s “This Week.”

“For the president’s spokesman to say, that, ‘Well, there was only words or technical changes made in those emails’ is a flat-out untruth,” McCain added. “That’s just not acceptable.”

McCain called for a congressional committee to investigate the matter, while adding that former Secretary of State Hillary Clinton should again testify in front of Congress.

The longtime senator, however, implied that President Barack Obama should not be impeached.

“With all due respect, I think this is a serious issue,” McCain told the network. “I will even give the president the benefit of the doubt on some of these things. We need a select committee.”

But he said that Clinton “has played a role in this,” adding that “she had to have been in the loop some way, but we don’t know for sure.”

Clinton, he added, should return to Congress and against testify.

“We need a select committee that interviews everybody,” McCain said. “I don’t know what level of scandal, unquote, this rises to, but I know it rises to the level where it requires a full and complete ventilation of these facts… We’re still uncovering information which frankly contradicts the original line that the administration took.”

Thomas Pickering, the co-chair of the Benghazi Accountability Review Board, told CNN’s “State of the Union” that critics of his board’s report made the wrong assumptions.

Critics alleged that his board’s report did not investigate the matter deeply.

“I’m waiting to see whether there’s any ‘there’ there yet. I’ve looked at it very carefully, I listened to the hearings. A number of criticisms were not based on the actual happenings,” Pickering said over the weekend, according to the network.