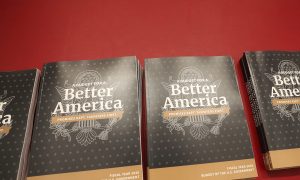 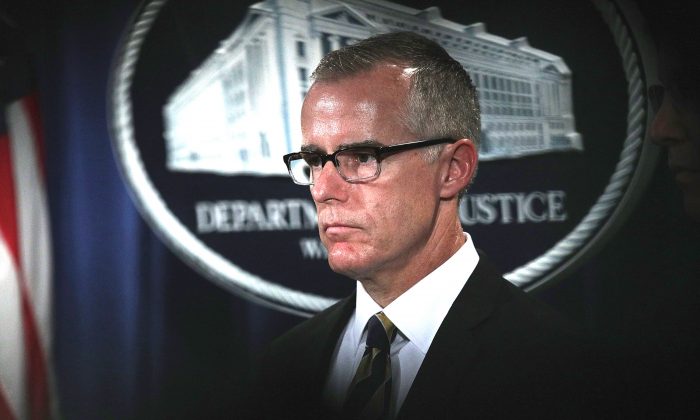 WASHINGTON—Former Acting FBI Director Andrew McCabe unequivocably claimed in a memo written for the record that then-Deputy Attorney General Rod Rosenstein offered in a 2017 meeting to wear a wire secretly to record President Donald Trump in the White House.

The meeting was called in the aftermath of Trump’s May 11, 2017, firing of then-FBI Director James Comey. Rosenstein was heavily involved in discussions with Trump, then-Attorney General Jeff Sessions, then-White House Counsel Don McGahn, and others on what to do with Comey.

Judicial Watch obtained a copy of the memo Sept. 20 as a result of its Freedom of Information Act litigation filed after the Department of Justice (DOJ) and the FBI failed to respond to the nonprofit government watchdog’s 2018 request for all documents concerning discussions by any officials within those agencies about invoking the 25th Amendment, which provides for removing the president on the grounds of his inability to perform the duties of the office.

McCabe earlier this year made contradictory statements during media interviews about key aspects of the memo, but Judicial Watch’s release of a significantly redacted copy of the memo on Sept. 23 is the first time it has been made public.

In the memo, McCabe initially told Rosenstein that he had opened an FBI investigation of Trump on collusion with the Russians.

“As our conversation continued, the DAG [deputy attorney general] proposed that he could potentially wear a recording device into the Oval Office to collect additional evidence on the President’s true intentions,” McCabe said in the memo.

“He said he thought this might be possible because he was not searched when he entered the White House. I told him that I would discuss the opportunity with my investigative team and get back to him.”

The New York Times first reported McCabe’s claim about Rosenstein offering to wear the wire in a Sept. 21, 2018, story, adding that during the meeting memorialized in the memo, there was discussion about invoking the 25th Amendment.

Rosenstein hotly denied the newspaper’s story, calling it “inaccurate and factually incorrect.” Rosenstein’s wire suggestion reportedly was made sarcastically, according to an unnamed individual who claimed to have been present in the meeting.

There is no mention in McCabe’s memo of any discussion during the meeting of the 25th amendment, but McCabe told CBS News “60 Minutes” in a Feb. 17, 2019, interview that the constitutional remedy for an incapacitated chief executive was discussed extensively.

“Discussion of the 25th Amendment was, was simply, Rod raised the issue and discussed it with me in the context of thinking about how many other Cabinet officials might support such an effort. … It was really something that he kind of threw out in a very frenzied, chaotic conversation about where we were and what we needed to do next,” McCabe told CBS interviewer Scott Pelley.

As The Epoch Times’ Jeff Carlson reported, however, McCabe told MSNBC’s Willie Geist in an interview after the “60 Minutes” bombshell was broadcast that “the conversation was not about removing the president.”

But when Geist pressed McCabe that removing the president is the point of the amendment, McCabe said, “Rod brought up the 25th Amendment—mentioned it in the course of a wide-ranging and frenetic conversation.

“It is not something that I’m aware of he took any action to pursue. I don’t know about any other meetings that included discussions of it. It was simply one thing, one topic, in the midst of a whole host of issues that we were thinking about and kind of working through our heads at that time.”

“It is astonishing and shocking McCabe thought he could have the FBI conduct a ‘counterintelligence’ operation on the president and Rosenstein thought it would be appropriate to wear a wire to secretly record President Trump in the Oval Office. That the DOJ and FBI sat on this smoking gun for a year shows the need for urgent housecleaning at those agencies.”