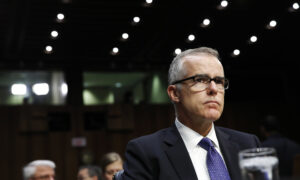 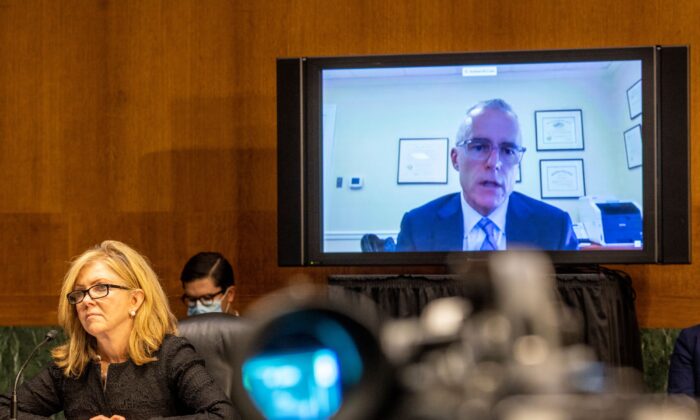 Former FBI Deputy Director Andrew McCabe told a Senate committee on Tuesday that he would not have signed off on the FBI’s warrant application for surveillance of former Trump campaign adviser Carter Page if he had been aware of the inaccuracies it contained. He also defended the agency’s probe as a legitimate investigation into Russian election interference and not a partisan bid to hurt President Donald Trump.

“The IG’s review of four FISA applications and other aspects of the FBI’s Crossfire Hurricane investigation details a significant number of errors and failures related to the FISA applications in this case,” McCabe told members of the Senate Judiciary Committee on Nov. 10, referring to the Justice Department’s Office of the Inspector General (IOG) report on the FBI’s Crossfire Hurricane investigation into Russian interference in the 2016 election and alleged ties to members of the Trump campaign (pdf).

“I was shocked and disappointed at the errors and mistakes that the OIG found,” he said. “To me, any material misrepresentation or error in a FISA application is unacceptable. Period. The FBI should be held to the standard of scrupulous accuracy that the court demands.”

Senate Judiciary Committee chairman Sen. Lindsey Graham (R-S.C.) pressed McCabe on the Page warrant that was filed under the Foreign Intelligence Surveillance Act (FISA), in which the controversial Steele dossier played a key role. Graham referred to earlier sworn testimony by Justice Department official Bruce Ohr about concerns he said he expressed to McCabe about the reliability of the dossier.

“Did he tell you you should be concerned and be careful?” Graham asked, referring to Ohr’s testimony that he advised caution regarding the dossier, including the caveat that “Steele hated Trump.”

“I don’t remember the specifics of our conversation,” McCabe replied. “However, we were engaged in trying to determine and verify the statements in Mr. Steele’s reporting at that time. So we were certainly concerned about those things.”

Graham then asked McCabe if he would have approved the warrant application if he knew then what he knows now.

The South Carolina senator then pressed McCabe about who was ultimately to blame: “Who is responsible for ruining Mr. Carter Page’s life?”

“I think that we are all responsible for the work that went into that FISA. I am certainly responsible as a person in a leadership position with oversight over these matters. I accept that responsibility fully,” McCabe said.

“Did you mislead the FISA court?” Graham asked.

“I signed a package that included numerous factual errors or failed to include information that should have been brought to the court,” McCabe said.

Asked about what should be done to hold those responsible accountable, McCabe said: “I think we are doing that with this process. I think our efforts should be focused on figuring out how these errors took place and ensuring that they don’t happen again.”

Sen. Dianne Feinstein (D-Calif.) then asked McCabe about whether he believed the FBI’s launch of the probe into Russian election interference was legitimate, referring to the fact that then-Inspector General Michael Horowitz “confirmed that the FBI had a legitimate reason to open the Crossfire Hurricane investigation.”