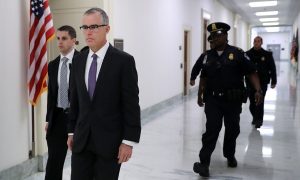 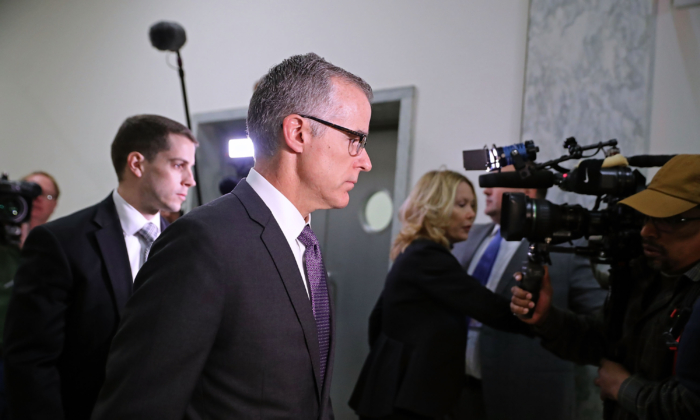 Then-acting FBI Director Andrew McCabe opened a criminal investigation of President Donald Trump on May 16, 2017, one day before then-Deputy Attorney General Rod Rosenstein appointed Robert Mueller as special counsel, according to a memo by McCabe released on Sept. 23.

“I explained that the purpose of the investigation was to investigate allegations of possible collusion between the president and the Russian Government, possible obstruction of justice related to the firing of FBI Director James Comey, and possible conspiracy to obstruct justice,” McCabe wrote.

According to the memo, upon learning that McCabe had opened a formal investigation, Rosenstein told the acting bureau director that he had two candidates ready to do it, one of whom could start immediately. In the event Rosenstein was removed before he made the appointment, he had delegated the appointment to acting Assistant Attorney General for National Security Dana Boente, the memo states.

The May 16, 2017, meeting summarized in the memo has already been the subject of controversy due to an offer Rosenstein made to wear a wire to record Trump. The Department of Justice holds that Rosenstein made the offer in jest; The New York Times cited an unidentified source saying the offer was serious.

“It is astonishing and shocking McCabe thought he could have the FBI conduct a ‘counterintelligence’ operation on the president and Rosenstein thought it would be appropriate to wear a wire to secretly record President Trump in the Oval Office.

“That the DOJ and FBI sat on this smoking gun for a year shows the need for urgent house cleaning at those agencies.”

According to the memo, McCabe spent the opening of the meeting explaining his reasons for starting the investigation. McCabe also informed Rosenstein that Rosenstein is a witness in the case because he participated in the firing of FBI Director James Comey.

Deputy Assistant AG for Intelligence Tashina Gauhar and Principal Associate Deputy Attorney General Jim Crowell were present at the meeting, according to the memo. Rosenstein told the people present about his visit to the White House from the week before. According to McCabe’s summary of Rosenstein’s remarks, Trump had instructed Rosenstein to write up the memo to recommend Comey’s termination.

“As our conversation continued the DAG [Deputy Attorney General] proposed that he could potentially wear a recording device into the Oval Office to collect additional evidence on the President’s true intentions. He said he thought this might be possible because he was not searched when he entered the White House. I told him that I would discuss the opportunity with my investigative team and get back to him,” McCabe wrote.

The “investigative team” McCabe referred to was led by Deputy Assistant Director Peter Strzok, the FBI official notorious for his text messages expressing intense animus against Trump. Both Strzok and McCabe have been fired from the FBI.