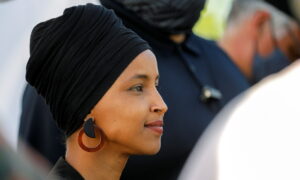 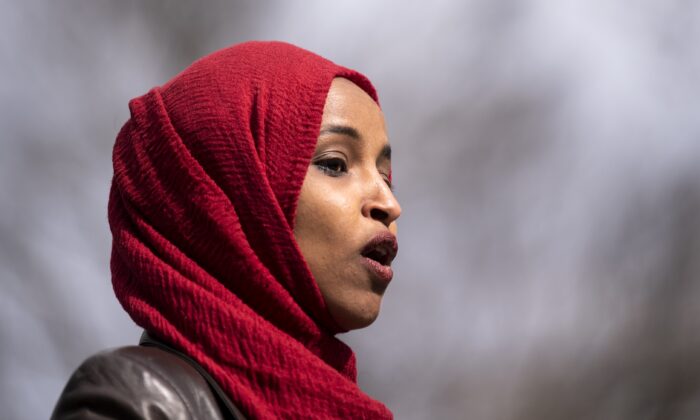 Republicans will kick Rep. Ilhan Omar (D-Minn.) off the House Foreign Affairs Committee if the GOP regains control of the lower chamber in the 2022 midterm elections, according to House Minority Leader Kevin McCarthy (R-Calif.).

“I will promise you this,” McCarthy said on “Fox & Friends” on Tuesday. “If we are fortunate enough to have the majority, Omar would not be serving on Foreign Affairs, or anybody that has an anti-Semitic, anti-American view. That is not productive and that is not right.”

Republicans, and some Democrats, became upset after Omar equated the United States and Israel with designated terror groups.

“We must have the same level of accountability and justice for all victims of crimes against humanity. We have seen unthinkable atrocities committed by the U.S., Hamas, Israel, Afghanistan, and the Taliban,” Omar wrote in a recent tweet.

Under pressure from colleagues, Omar later issued a statement she described as clarifying her previous remarks. “I was in no way equating terrorist organizations with democratic countries with well-established judicial systems,” she said.

House Speaker Nancy Pelosi (D-Calif.) said the statement was sufficient and no action would be taken against Omar.

“Congresswoman Omar is a valued member of our caucus. She asked her questions of the secretary of state. Nobody criticized those, about how people will be held accountable if we’re not going to the International Court of Justice. That was a very legitimate question. That was not of concern. Members did become concerned when the tweet that was put out equated the United States with the Taliban and Hamas,” Pelosi said on CNN’s “State of the Union” on Sunday.

“But what I’m saying is end of subject. She clarified. We thanked her. End of subject,” she added later.

McCarthy expressed disbelief that Pelosi said Omar was not rebuked by top Democrats for her remarks.

“I think Nancy Pelosi should remove Omar from the Foreign Affairs Committee. This is an individual that has not once but on numerous occasions been anti-Semitic. Her own entire Congress had to rebuke her in the last one. But she’s just not anti-Semitic, she’s anti-American now. She’s equating America to Taliban, to Hamas. She’s discrediting our greatest ally in the Middle East, Israel, the only democracy,” he said.

“But the Democratic party and the leader of that party, the speaker, said on her Sunday show that she did not rebuke her, she thanked her. So the Democrats believe this message? That is what’s in doubt for me,” he added, before promising the GOP would strip Omar of the Foreign Affairs assignment if Republicans flip the lower chamber.

Republicans recently saw Democrats strip Rep. Marjorie Taylor Greene (R-Ga.) of all of her committee assignments over comments Greene made before entering office in January.

Eleven Republicans joined Democrats in the vote, though Democrats could have approved the resolution with no GOP support. Democrats currently have an eight-vote majority in the House.