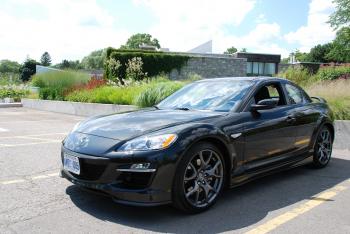 Titus Hsu
View profile
Follow
biggersmaller
Print
The Mazda RX-8 is the successor to the highly-regarded RX-7, and inherited the position of the company's flagship sports car. Its sharp and stylish exterior is accompanied by a very unique power plant.

The RX-8 is available in two trim levels: GS and GT. Both models are equipped with the same engine. The GT model adds Dynamic Stability Control (DSC), xenon headlights, automatic headlight levelling, Bluetooth, satellite radio, moonroof, leather upholstery, and 8-way power-adjustable seats. The MSRP for the GS model is $37,295. The test vehicle is the GS trim with 6-speed manual transmission and optional R3 package, which includes performance parts such as a rear spoiler, integrated front bumper, Recaro seats, and 19-inch wheels. The MSRP for the R3 model is $40,780.

One of the most distinctive features of the RX-8 is undoubtedly its Wankel rotary engine. For four decades, Mazda has continued to champion the use of rotary engines in its high-end vehicles. The current design being used in the RX-8 was introduced in 2003 with the name "Renesis." Unlike the common piston engines, rotary engines have fewer moving parts, and power is derived from the circular motion of rotors. The end result is a significantly lighter and smoother engine. However, rotary engines do have drawbacks: fuel efficiency and emission. Forty years of research and refinement by Mazda engineers have kept these shortcomings under control. The gas consumption is rated at 12.8L/100 km for city driving and 9.2L/100 km on the highway.

Due to the simple and smooth nature of rotary engines, they can be driven to much higher rpms than common piston engines, and they make a very distinctive sound. This engine redlines at 8500 rpm, and sounds like a buzz rather than the common low growl.

Car engines are very heavy. Where you put this weight in a car has a strong impact on its handling. Mazda placed the Renesis engine in a "front midship" layout, which puts the engine behind the centre line of the front wheels. This design is a Mazda heritage for its sports cars, which can also be seen in the likes of RX-7 and MX-5.

The throttle on the RX-8 is quick and light. It would seem that it has a lightweight flywheel. Lightly press down on the gas pedal, and the engine rpm shoot up immediately. At the same time, the moment you take your foot off the gas pedal and disengage the clutch, the engine rpm drop like a rock. Because of this, your foot needs to be fairly quick with the clutch pedal when changing gears. Fortunately, the metal pedal has a very shallow travel and clearly conveys the feel of the clutch plate coming in contact with the flywheel. Because of this short open-to-close distance, it almost feels like operating a binary on-off switch. Completing the manual transmission package is a short-throw gear shifter, which is quick and precise in switching gears. The whole gear shifting process is quick and snappy.

Everything in the handling department of the RX-8 can be described as immediate—the antithesis of sluggish—and the essence of the energetic, spirited drive. Press down on the gas pedal, and the engine immediately responds. Approaching a curve, the gear shifter and clutch pedal make for a quick down shift. The nose of the car traces the movement of the steering wheel and the RX-8 slices through the curve with scalpel precision.

Considering the curb weight of 1410 kg, the car feels surprisingly light. This is likely due to the quick and nimble response of the steering. The 19-inch tires on the test vehicle grip the pavement and the sports-tuned suspension with Bilstein front and back dampers hold the car steady. Making a right-hand turn around a corner at 40 km/h felt like the vehicle was on rails. Ventilated disc brakes with ABS provide the stopping power to bring the car to a halt firmly.

The RX-8 is standard-equipped with a premium audio system, which includes nine Bose speakers. But for this car, the sound from the rotary engine is by far the sweetest driving music. The rise in the pitch of the low buzz stirs up your senses and keeps telling you to go faster.

Being a purebred sports car, some sacrifices have to be made in the practicality department. Unlike its predecessor, the RX-7, Mazda did try improving the practicality aspect of the RX-8 by adding two rear seats and two more "doors" to make getting into and out of the back seats easier. These rear doors are smaller than usual and swing open toward the back, another distinctive feature of the RX-8.

Depending on who is sitting in the front seat, the legroom in the back can become quite limited. The Recaro seats firmly support the driver and the front seat passenger in tight turns, but they are much lower and firmer than the common seats. Getting in and out of these seats also takes a bit of effort.

The trunk space is also somewhat limited. As a result, the RX-8 actually does not carry an emergency spare tire in the trunk. Instead, it is equipped with an emergency tire patch kit.

Another consideration is gas consumption. Mazda engineers have come a long way in improving the fuel efficiency of the rotary engine, but nonetheless, driving this car would bump up your weekly gas cost.

But when you are behind the wheel of the RX-8, the sound of the engine revving up quickly makes you forget about gas prices. After all, what is the point of owning such a car if you are not going to have fun driving it?