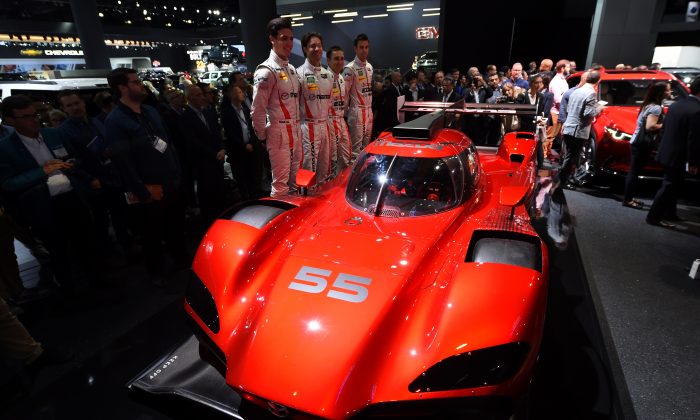 In an event which was also streamed live, Mazda pulled the covers off the first of the new Daytona Prototype International class of cars to be revealed publicly—a Riley/Multimatic LMP2 chassis with bespoke bodywork, powered by a two-liter twin turbocharged inline four engine.

Mazda’s previous IMSA prototypes used Lola/Multimatic bodywork, so collaborating with the new Riley/Multimatic partnership will be a comfortable continuation. The motor is a 600-bhp version of the Mazda-AER MZ-2.0T four-cylinder which powered the last generation of prototypes. Mazda will also keep the same all-American driver lineup of Tristan Nunez, Jonathan Bomarito, Tom Long and Joel Miller.

“This new DPi race car reaffirms Mazda’s longstanding commitment to IMSA and the WeatherTech Championship,” said IMSA President Scott Atherton. “This first public unveiling of a DPi is the culmination of several months of collaboration between Mazda, the Riley/Multimatic partnership and IMSA. This car is nothing short of breathtaking, and represents a benchmark example of the vision we have for how manufacturers incorporate their production car design elements into a prototype race car. We eagerly anticipate its competition debut in the Rolex 24 At Daytona this coming January.”

Mazda calls the new car the “Mazda RT24-P” in honor of Mazda’s Road to Indy program, which bring up young drivers through a ladder of increasingly faster racing series. The program has launched the career of many of today’s top professionals and is currently incubating the next generation of stars.

“KODO design is at the heart of any vehicle that carries a Mazda badge, and that is very evident in the design of the 2017 prototype,” said Ken Saward, senior manager of Design at Mazda Design Americas. “We considered the two main parameters of designing a successful race car for this series: aerodynamic performance and the new-for-2017 technical regulations.

“Working with Multimatic’s aerodynamicist and engineers, we discovered that applying the KODO design philosophy to the surfaces and the silhouette of the car enabled us to create a dynamic, purposeful-looking design and a very aerodynamically efficient one.”

Whatever the company chooses to call the process, the car it produced has been well received by fans on the Internet. Unlike the some of the exceedingly business-like, often ungainly-appearing LMP1 cars, the new LMP2-based Mazda presents rounded, flowing forms which look organic and yet are still aerodynamically efficient.

Mazda’s new DPis will be operated on track by SpeedSource Race Engineering, the same title-winning team which crewed the last Mazda prototypes. The same crew of drivers will be back as well: Tristan Nunez, Jonathan Bomarito, Tom Long and Joel Miller.

Nunez scored two poles and a podium finish in the 2016 Mazda prototype; teammate Jonathan Bomarito added another, plus another podium finish. Tom Long and Tristan Nunez each scored a fastest race lap. All this was done with an engine less powerful than the version prepared for 2017, and a chassis which was several years old. With power a=on par with their rivals and a brand-new, cutting-edge P2 chassis, the Mazda squad should finally taste victory in IMSA’s top class.

“This is a huge moment for Mazda Motorsports and the entire Mazda family,” said John Doonan, director of Mazda Motorsports North America. “To have a car which features Mazda design language at the top level of our motorsports program is meaningful for us as a brand. We believe we have the right team, the right drivers and the right chassis to win races and championships.”

IMSA WSC teams will be back to Daytona International Speedway for further testing in mid-December, preparing for the Roar Before the Rolex 24, Jan. 6–8, 2017.