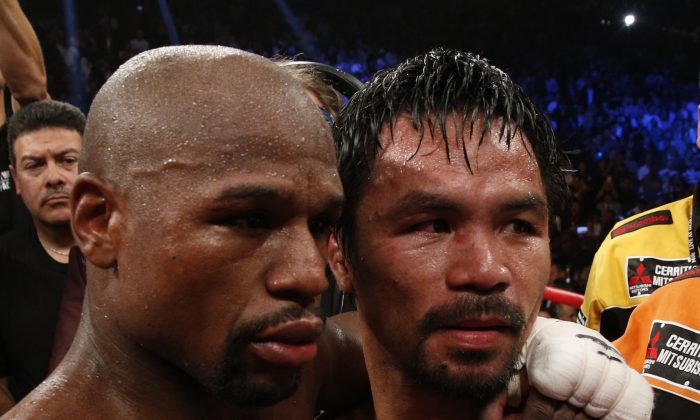 Floyd Mayweather Jr., (L) beat Manny Pacquiao in one of the most anticipated boxing bouts ever. Could there be a rematch? (John Gurzinski/AFP/Getty Images)
Sports

Could Floyd Mayweather Jr.. and Manny Pacquiao fight again? The boxing world finally got the long-awaited match last May when Mayweather beat an injured Pacquaio in what turned out to be a 12-round dud of a fight, grossing a record $600 million.

Now the question is whether the two will get back in the ring and put on a better show.

The answer, according to a report on TMZ Sports, is “more than likely” according to Manny Pacquiao’s promoter Bob Arun. “It’s close to 50/50 but probably leaning more toward the fight happening,” says Arum.

Floyd Mayweather Jr. vs. Manny Pacquiao II: Is it possible?: By Babatis Banda: It is clear that boxing is in… https://t.co/qgX1IsUWXz

One thing standing in the way is that both Mayweather Jr. (49–0) and Pacquiao (58–6–2) have both stated that they’re retired. Retirements, though, are a fickle thing in the boxing world.

The 39-year-old Mayweather Jr.—who last fought in September, beating Andre Burto—is focused on promoting his boxers while the 37-year-old Pacquiao—who just recently beat Timothy Bradley Jr. on April 9—may be getting involved in politics in the Philippines.

“If the match was available, I believe [Manny] would come back for that match.”

While a rematch probably won’t generate the $600 million the first one did in smashing boxing revenue records, it still could possibly land in the $300 to $500 million range, which could be worth another nine-digit payday to both fighters.

That projected sum of money may turn out to be too much for either boxer to say no to. “If either man agrees to fight, my feeling is that they won’t be able to resist,” says Arum.