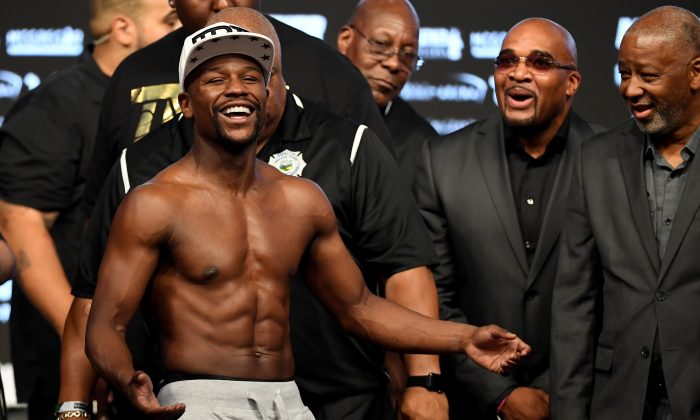 Mayweather Attempted to Bet on Himself Before Big Fight

Floyd Mayweather Jr. reportedly tried to place a bet on himself winning against UFC star Conor McGregor—and was turned away.

According to ESPN, sources said that Mayweather, 40, tried to go into the sportsbook at the M Resort in Las Vegas and with cash.

He also tried to bet on himself to win via knockout—but he was unhappy about having to wait to wager. Mayweather left without betting.

ESPN reports that Mayweather would have won either attempted bet.

“He was pissed,” one source told ESPN.

“I think that we bet 100 on 9½,” Mayweather told ESPN. “I gave my guy six figures to go bet. I have to make sure he bet because earlier today I went to the sports book to bet and they wouldn’t let me bet.”

The Nevada State Athletic Commission and Nevada Gaming Control do not have regulations on fighters betting on themselves.

Reports have indicated that Mayweather is set to make at least $100 million for the fight and McGregor will make $30 million. But after PPV buys, Mayweather could make $300 million, while there is speculation that McGregor could earn over $100 million.

“I wanted my hands to be solid so when I came out here and I’m shooting hard shots, I was able to put the guy down,” he explained, adding that he was “shocked” by McGregor’s abilities in the ring.

“That was the plan. Let him come out trying to kill me with big shots early on, and then beat him down the stretch. My father thought it would be six or seven. It took a little longer.”