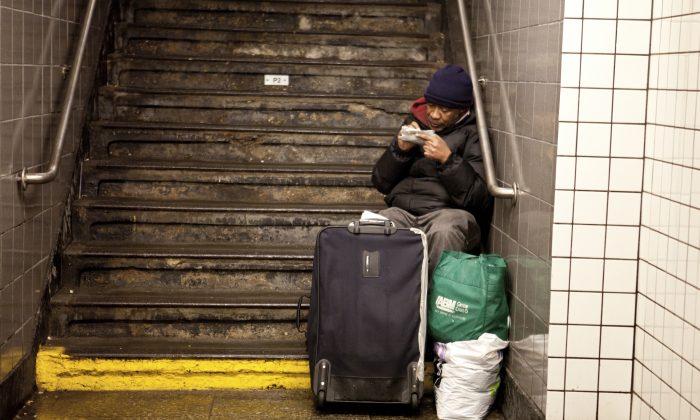 NEW YORK—The head of New York City’s beleaguered Homeless Services agency is stepping down amid a stubborn rise in homelessness that has become a significant political problem for Mayor Bill de Blasio.

Gilbert Taylor, who was appointed commissioner of the Department of Homeless Services when de Blasio took office in January 2014, announced Tuesday he is resigning his post at year’s end. His sudden departure comes as part of an overhaul of the department that has struggled to combat the rise in homelessness in the nation’s largest city.

“It’s a very tough problem. It’s not going to go away anytime soon,” said de Blasio, announcing a 90-day review of the department. “What we have seen in recent years is the new face of homelessness. More and more of the homeless are family members, not single adults, and more are homeless because of economic reasons, not because of substance abuse or mental health problems.”

Nearly 58,000 people are living in New York’s homeless shelters, according to statistics released by the city this week. More than 23,000 of them are children. An additional 3,000 or so people are estimated to be living on the city’s streets.

The numbers are down slightly from a peak last winter but still up from when de Blasio took office. His critics have seized upon the rise as evidence that the mayor’s liberal policies are failing those who need the most help.

Some highly visible examples of homelessness have become a regular sight in the city’s tabloids and on local TV newscasts, and a poll released last month showed that nearly two-thirds of New Yorkers disapproved of how de Blasio has handled the issue. The mayor’s overall approval ratings have also sunk, now topping out in the low 40s in several recent polls.

Moreover, it’s become the latest front in the ongoing cold war between de Blasio and Gov. Andrew Cuomo, who suggested that he will announce next month that the state will intervene to manage the problem because the city hasn’t been able to.

Mayoral aides have touted the steps the city has taken to manage the issue, including a $2.6 billion investment to pay for the creation of 15,000 “supportive housing” units for the homeless—apartments that will be paired with on-site social services to help domestic abuse victims, veterans, drug addicts and those living on the street. The city has also repaired dozens of shelters, cleaned up unsafe homeless encampments and created beds for the homeless in houses of worship.

More than 22,000 people have been able to leave shelters but they have largely been replaced with people who are newly homeless.

“The policies are working. We want them to work better,” de Blasio insisted. “What I pledge to you is that we’ll be working on it constantly.”

Mayoral aides said that Taylor asked to leave a short time after being informed of the impending review. But Taylor met with City Council staffers Monday and gave no indication then that he was departing.

De Blasio said Human Resources Administration Commissioner Steve Banks and First Deputy Mayor Anthony Shorris will lead the review of the Department of Homeless Services. De Blasio said that DHS and HRA needed to better coordinate and said that department policies put in place 20 years ago may have become outdated.

The Coalition for the Homeless, a leading advocacy group, said the review “was important and timely” as the city “grapples with near-record homelessness.”

Taylor, who released a statement saying he felt “good about how far I have been able” to take the agency, is the second major departure of an official overseeing homelessness in New York City. Deputy Mayor Lilliam Barrios Paoli departed in August. She has yet to be replaced.