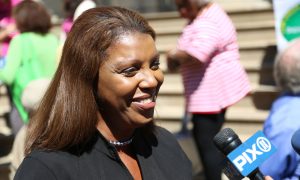 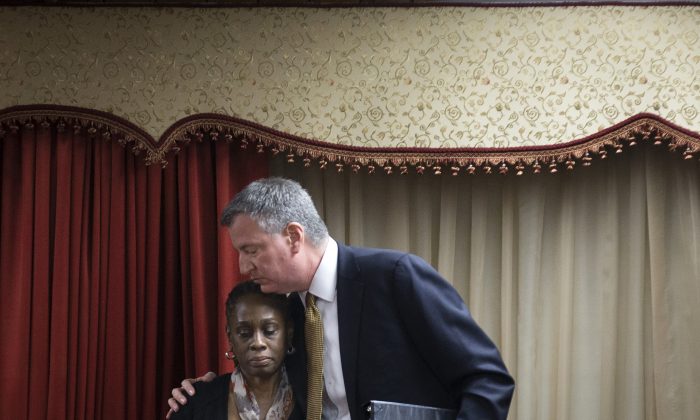 New York City Mayor Bill de Blasio (R) hugs his wife, Chirlane McCray, after speaking at the Church of God of Third Avenue as the congregation welcomed members of the Spanish Christian Church after the church was destroyed by Wednesday's explosion in the East Harlem neighborhood of New York, March 16, 2014. (AP Photo/John Minchillo)
East Harlem Explosion

NEW YORK—In her first major move as head of the Mayor’s Fund to Advance New York City, Chirlane McCray announced Sunday that the fund has secured commitments of more than $250,000 to benefit the victims of last week’s deadly explosion in East Harlem.

And that is just the initial sum.

McCray said Sunday that the Mayor’s Fund will continue raising funds for the victims and urged people to donate. Mayor Bill de Blasio’s wife made the announcement at Bethel Gospel Assembly, which lost two of its members in the explosion that led to the collapse of two buildings on Park Avenue near East 116th Street on March 19.

The initial donations came from the Real Estate Board of New York, the Rudin Family, Con Edison, the Association for a Better New York, and board members of the East Harlem Tutorial Company.

The funds will be used according to a strategic plan developed by the Mayor’s Fund.

As part of the plan, a victims’ assistance fund will provide cash subsidies of up to $15,000 to victims via direct deposit. Victims can use the funds for rental costs, home goods and furnishings, funerals, and transportation.

In addition, the funds will be used to provide mental health services and crisis counseling to victims. A portion of the money will also be used to reach out to the community impacted by the blast.

“Tragedy presents so many unanswered questions and so much anxiety about the future,” McCray said Sunday. “Some residents of the destroyed buildings have a network of family and friends to lean on during a time of need. Others are not so fortunate. And that’s where the fund can assist.”

The victims’ fund was established and will be administered with the help of Council Speaker Melissa Mark-Viverito. The explosion occurred half a block from the speaker’s district office and she has been active in helping victims get the services they need. Mark-Viverito sent out an email to her district’s mailing list asking people to donate to the fund.

“New Yorkers always come together in times of crisis to help one another—and the response our community has received has been overwhelming,” Mark-Viverito stated in a press release.

As of Saturday, the Red Cross shelter in East Harlem was providing critical services to 30 families impacted by the explosion.

McCray attended the church service together with de Blasio. The mayor commended the local residents who rushed to help after hearing the explosion. He also spoke of the two police officers who saved a man from the rubble seconds before it was engulfed in flames.

“[The officers] ran into the fire, ran into the danger, because if they do they might be able to save one life,” de Blasio said.