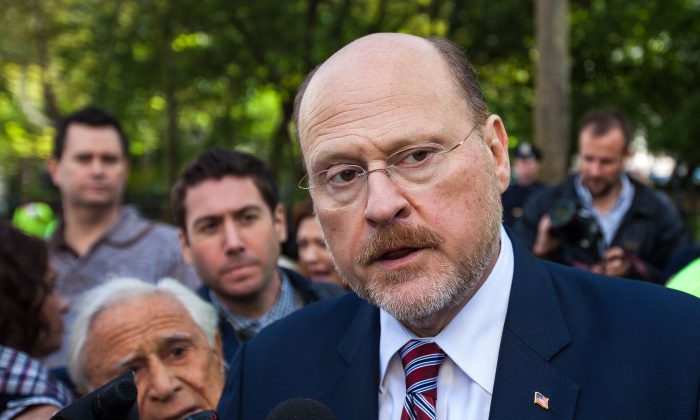 NEW YORK—Charter schools have been a major part of the educational overhaul under Mayor Michael Bloomberg. But Bloomberg will pass the charter torch to the next administration, and how charters will fit into public education in the city will depend on who is elected.

On Tuesday, thousands of parents and children marched across the Brooklyn Bridge, largely in protest to the position of Democratic mayoral candidate Bill de Blasio. De Blasio, who is considered the front-runner in the race against Republican Joe Lhota, has said he will not follow in Bloomberg’s footsteps with regard to charter schools.

“I won’t favor charters the way the Bloomberg administration did. I think that is fair,” de Blasio said after speaking at a CityLab event hosted by The Atlantic. Citing that charter schools only represent 5 percent of the public schools in the city, de Blasio said he would not expand the program, but would focus much of his energy on improving the public schools instead.

“That other 95 percent is how we will live or die,” de Blasio said. The mayoral hopeful has continually said he would not ask for an increase to the charter school cap, which is currently set at 460 statewide, according to NYCCharterschools.org.

New York City that has close to 200 charter schools (as well as eight approved, but not yet built) would only be allowed to build 66 more charters without increasing the cap, according to the New York Times.

De Blasio has also proposed charging rent to some charter schools—one of the main complaints heard at the rally.

De Blasio did not attend the rally, but was asked by a reporter to respond to comments from children who marched, saying they were fearful of their school being shut down.

“I think some of the charter school activist should think about and be mindful about their choice of words when they are talking to each other,” de Blasio said. “I don’t think it is appropriate to scare children in that fashion.”

He added he would not arbitrarily shut down charters, but would not be afraid to close underperforming charters.

“Charters that are doing a good job and representing our children’s needs will do fine with me. Who won’t be so fine? Charters who are failing,” de Blasio said. De Blasio has been an outspoken critic of school closures, saying he would issue a moratorium on them—including charter schools—if elected.

He later walked back the statement about closing charters, saying the same standards would apply to all schools.

De Blasio’s position is in stark contrast to his Republican rival Joe Lhota. After speaking at an ABNY breakfast, Lhota went to City Hall Park to join his wife and daughter at a rally to show his support for the pro-charter movement.

“No matter where you go throughout the United States, or any graduate school of education, they are all talking about the future of public education begins with the charter school movement,” Lhota said at the CityLab event. “It is the single most progressive thing going on in public education today.”

Lhota has vowed to double the number of charter schools if elected, meaning he would need to go to Albany to expand the cap.

Lhota, who said he has visited six or seven charter schools, said the teachers he spoke to have praised the additional training and development not found in traditional public schools.

The mayoral hopeful has said he would not raise rents on charter schools, unlike his rival de Blasio.

“I think anything you do to reduce competition and choice for parents is not the way we should be doing things in this country,” Lhota said.