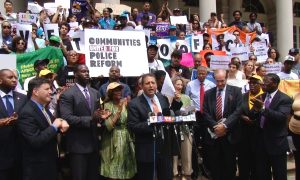 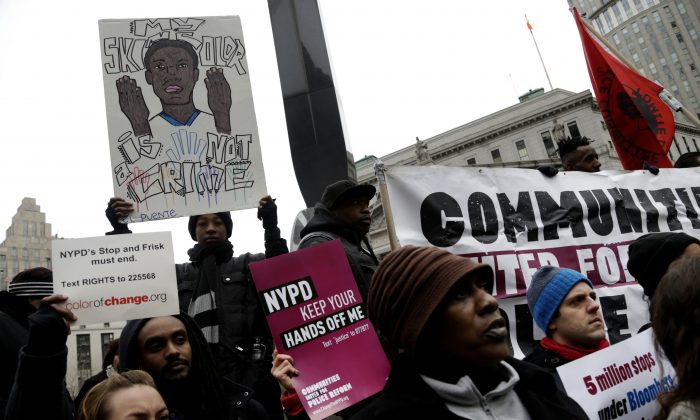 Protesters participate in a rally near the federal courthouse in New York, Monday, March 18, 2013. Many of the 5 million New Yorkers stopped, questioned and sometimes frisked by police in the past decade were wrongly targeted because of their race, lawyers for four men who said they were illegally stopped said Monday. Aug. 12, the court sided with the plaintiffs. (AP Photo/Seth Wenig)
New York

Mayoral candidates and city council members released the following statements today in response to the ruling:

Christine Quinn, mayoral candidate
“Today’s court ruling affirms what we have known for some time, too many young men of color are being stopped in the streets of New York in an unconstitutional manner and that must stop. At the height of this program, some 700,000 New Yorkers have been stopped with the overwhelming number resulting in no arrest or seizing of contraband, that’s why the city needs—and I passed—and inspector general for the NYPD. The NYPD inspector general will help review and provide guidance to ensure that stop and frisk is done in a constitutionally sound manner that focuses on the quality of the stops, not the quantity. And as mayor, I intend to work with the federal monitor to help ensure these stops come down dramatically so that we can build stronger relationships between our communities of color and our police force. ”

Bill de Blasio, mayoral candidate
“The courts have just affirmed facts that too many New Yorkers know to be true: under the Bloomberg administration, with the acquiescence of Speaker Quinn, millions of innocent New Yorkers—overwhelmingly young men of color—have been illegally stopped. The overuse and misuse of stop and frisk hasn’t made New York a safer city, it has only served to drive police and community further apart. The only way to end the abuse of stop and frisk in New York City is with real reform, and I am the only candidate committed to enacting the changes we urgently need. We must override Mayor Bloomberg’s vetoes of legislation to ban racial profiling and to create an independent inspector general for the NYPD.”

Bill Thompson, mayoral candidate
“As I have said, the present stop-and-frisk policy violates the constitutional rights of all New Yorkers, but especially innocent blacks and Latinos. Instead of treating our police and people with respect, the mayor and Commissioner Kelly have imposed what are effectively quotas on the police and treated entire minority communities with suspicion.

“I want to thank the men and women who came forward to testify to ensure everyone’s constitutional rights are preserved. I want them—and all New Yorkers—to know that I will protect our streets and protect the rights of our people. I will uphold the law and work with the federal monitor to make sure New Yorkers never have to choose between their constitutional rights and their safety. I will ensure the court’s decision fulfills its objective—a New York where everyone is protected by the law.”

Letitia James, city council member
“Today’s ruling reflects the urgency many of us feel about reforming stop and frisk in New York, and preserving the liberties of black and Latino youth throughout this city.”

“New Yorkers should not have to worry about their civil rights being violated by the very people who are there to protect them. It is imperative that the administration and the police department move to make transparent the rationale for street stops, as well as define long-used terms such as ‘furtive movements.’ I hope that following these federal rulings, the administration moves toward making the necessary changes to facilitate a healthier relationship with minority communities.”

Melissa Mark-Viverito, city council member
“Today’s ruling is a validation for all of us—elected officials, advocates, and New Yorkers across our city—who have seen stop and frisk for what it is: an unconstitutional police practice. I applaud Judge Scheindlin for calling for a federal monitor of the Police Department, who will surely institute a series of much-needed reforms over a policy that has relentlessly targeted low-income communities of color under the Bloomberg administration’s watch. Coupled with the pending veto override of the Community Safety Act, this is a truly historic time that will shape the future of police-community relations in our city for years to come. Safety only comes with a true community partnership along with police practices that respect the civil rights of all members of our community and are not based on the suspension of rights of one large segment of our population. This ruling validates that position.”