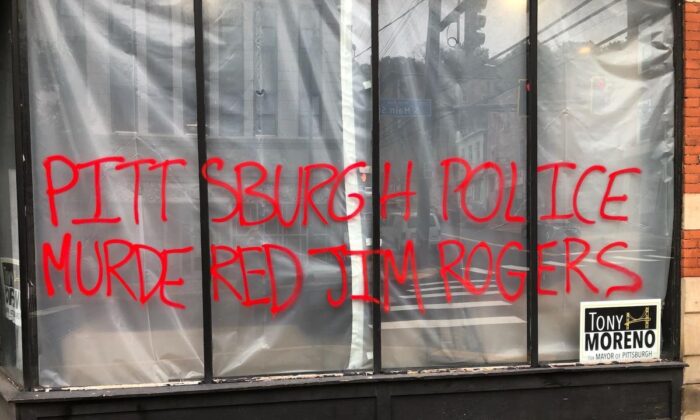 A glass door was shattered and someone scrawled “Pittsburgh police murdered Jim Rogers” in red spray paint on the front windows. Neighborhood video surveillance shows two people approached the building in the 3 a.m. hour. One stood as a look-out as the other painted.

“It’s just the lack of education in who I am and what I stand for,” Moreno told The Epoch Times in a phone interview Friday morning. “This is just political discourse. I believe we need change in our police department, and we need accountability. We need to address the problems that led to this death. It goes back to failed leadership.”

Rogers died in the hospital on Oct. 14, a day after a City of Pittsburgh Bureau of Police officer used a taser on him. His cause of death has not been released.

“A woman puts a bike in her yard with a sign, trying to sell it for $50. She can’t sell it, so she puts a sign on ‘for free,’” Moreno recounted his understanding of the incident. “He goes in yard and takes it for a ride. A neighbor sees and calls police. When police arrived, he was sitting on the bike owner’s porch smoking a cigarette.” Moreno surmises that he was probably waiting for the owner to come home to talk about the bike.

Moreno was familiar with Rogers and had given him a packet of cookies during Little Italy Days.

“He was harmless, but he had some mental health issues,” Moreno said. Video of the incident has been widely circulated.

“Nothing police did was outside policy of the use of force standards. Police did what they are trained to do and were even more lenient. But that doesn’t mean the encounter went the way it should have.”

“If there was good solid leadership in our police department, it would have been preventable. We have training and policy to instruct officers on how to look at 911 calls through a possible mental health lens, but it is not being enforced.”

Moreno was a Democrat but switched to Republican to get on the ballot for mayor. He is running against Democratic State Representative Ed Gainey, who has not responded to The Epoch Times’ request for an interview.

Gainey has had some issues with campaign finances through a Political Action Committee (PAC) called African Americans for Good Government, which funds his campaign.

Moses Nelson is Gainey’s campaign manager and PAC committee director, which Moreno says is a conflict.

The PAC treasurer, Leeretta Payne, was charged last month with a misdemeanor count of failing to file campaign finance reports.

Records show Payne failed to report checks totaling $60,000 from the Western Pennsylvania Laborer PAC, and there were disbursements from African Americans for Good Government through checks and ATM withdrawals that were not reported.

In the criminal complaint on that matter, Payne told Allegheny County Police two things: first that she was the only person who controlled the distribution of funds for the African Americans for Good Government PAC, and that Moses Nelson, who is the PAC executive chairman, also disburses money from the PAC.

Payne did not respond to a request for comment and Nelson could not be found.

“Ethically it is out of line for Moses Nelson to be part of Ed Gainey’s campaign,” Moreno said. “You have all this money flowing around you, and you don’t know anything about it? What kind of leader are you?”

He wants more information about the financial activity of Gainey’s campaign but says he can’t get his hands on the paperwork.

On Friday, Moreno filed a lawsuit against the Allegheny County District Attorney’s office and the Allegheny County Police Department asking for further documentation of the interview with Payne, search warrants, and any documents relating to Payne, Nelson, or Gainey in connection with the matter.

Moreno says he filed Right to Know requests, but they were denied, so now he is going through the court.

“Ed Gainey has to sign campaign finance reports just like I do. He is responsible for his campaign finances,” Moreno said. “I am not able to obtain the search warrant that will show all the facts in this case. There is a cover up and people are hiding this. The residents of Pittsburgh deserve to know all the facts regarding people they are voting for.”

An employee at the District Attorney’s office said the office cannot comment on the matter.

Allegheny County Police Department did not respond in time for this report.

When interviewed by WTAE about the matter in May, Gainey said he was unaware of the unreported transactions and had “nothing to do with their finances.”