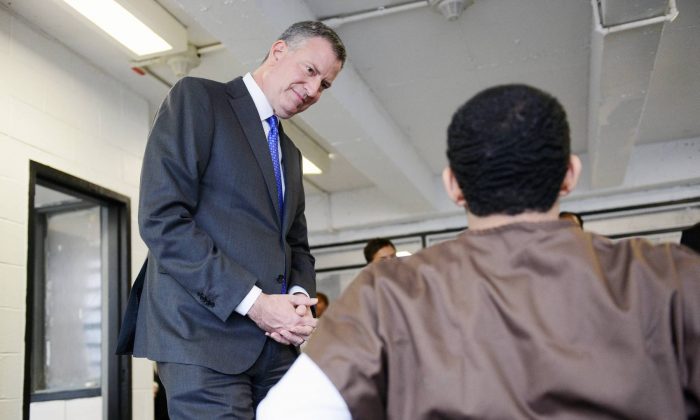 At a Wednesday press conference held within Rikers’ Robert N. Davoren Center (RNDC)—the facility where the U.S. Department of Justice (DOJ) said it uncovered “a deep-seated culture of violence” between adolescent inmates and from staff against inmates—the mayor stated the corrections department has implemented significant reforms in its treatment of youth and of mentally ill inmates.

The DOJ, which released the results of its investigation in August, threatened legal action if the corrections department did not make swift changes to its operations.

Whereas adolescents who broke jail rules were often punished with solitary confinement—spending at least 23 hours-a-day in an isolated cell—juvenile inmates will now get therapy and attend classes that teach them to change their behavior.

16 and 17 year-olds who commit serious infractions, such as physical assault, will be placed into Transitional Repair Units, where they receive individual and group therapy.

Those who have non-violent or low-level infractions are put into Second Chance Housing, where they learn about self-control and get rewarded for good behavior.

De Blasio, who spoke after touring the RNDC and the Anna M. Kross Center, a facility that houses inmates with mental illness, cited fewer staff use-of-force incidents as evidence that the department’s reforms are working.

This was de Blasio’s first visit to Rikers since he worked as an urban fellow for the city’s Department of Juvenile Justice during mayor Ed Koch’s administration in the 1980s.

In November, there were 31 use-of-force incidents at RNDC, compared to 97 in January. Ponte said he is still devising the appropriate programs for young adults 18 to 21 years old, another group that is especially vulnerable to the negative effects of solitary confinement.

The mayor expressed that decades of ill-advised policies have led the corrections department to fail in its “core mission” to provide rehabilitation to people who have made mistakes. “This is a place that had become a less and less safe environment, an environment unfair in many ways to those who were incarcerated here and those who worked here,” he said.

To people who committed crimes, “our job is to not write them off, but to see if we can bring them back,” de Blasio said—particularly for those who are mentally ill.

For the mentally ill who are prone to acting out with violence, the corrections department will debut a new housing unit next year, called Program to Accelerate Clinical Effectiveness (PACE), where inmates will receive therapy to help them recover.

Roughly 40 percent of Rikers inmates have been diagnosed with a mental illness.

Last month, commissioner Ponte also announced a new housing unit for inmates who are routinely involved in violent incidents, called Enhanced Supervision Housing. When asked about jail reform advocates’ concerns that the department was ambiguous about which inmates would fit the criteria, Ponte responded that he met with advocates from the American Civil Liberties Union to come up with a policy to identify violent inmates who pose a safety risk to others.

The inmates will also get access to “everything the normal population does,” but with an additional “journal program” where inmates will be asked to reflect on their actions and how to avoid violent behavior. Ponte said the unit is based on a program that was implemented in the Virginia corrections system and had successfully reduced violence there.