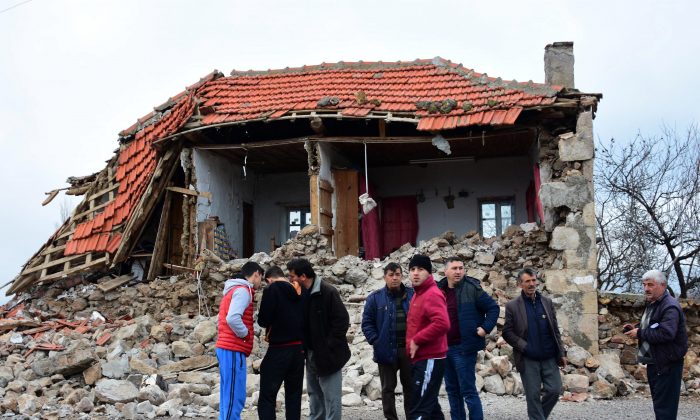 Villagers stand in front of a damaged house after two quakes, both with preliminary magnitudes of 5.3, jolted Turkey's northern Aegean coast, in Yukarikoy village Canakkale province on Feb. 6, 2017, damaging dozens of homes in at least five villages and injuring several people.(Mustafa Suicmez/DHA-Depo Photos via AP)
International

ANKARA, Turkey—The mayor of Ankara has suggested that two earthquakes that demolished homes on Turkey’s northern Aegean coast may have been triggered artificially as part of a plot to harm Turkey’s economy.

Melih Gokcek, who frequently courts controversy, said in a series of tweets on Tuesday that authorities should keep a close eye on all submarines and heavily equipped ships sailing off Turkey’s northwestern coast, where two magnitude-5.3 quakes damaged homes in 11 villages and injured five people on Monday.

Gokcek tweeted: “The blow they want to inflict on Turkey is to cause economic collapse through an earthquake near Istanbul. Some may ridicule this, but I take it seriously.”

The mayor had previously raised eyebrows by suggesting that a U.S.-based cleric, blamed for Turkey’s failed coup, uses genies to control his followers.