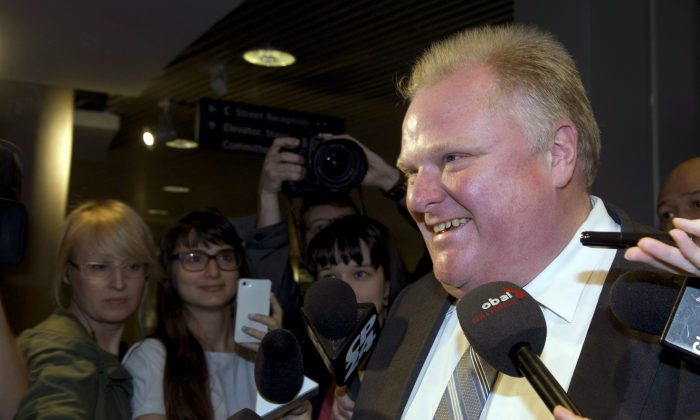 Toronto Mayor Rob Ford arrives at Toronto City Hall on May 17, 2013, amid allegations that he was recorded on video appearing to smoke crack cocaine. Councilor Doug Ford says his brother denies the allegations, which became fodder for U.S. talk show hosts Jimmy Kimmel and Jon Stewart on May 21. (THE CANADIAN PRESS/Frank Gunn)
Canada

TORONTO—Rob Ford’s staunchest supporter attempted on Wednesday to quell the storm of controversy raging around Toronto’s mayor over his alleged use of crack cocaine by citing his record in office and blasting the media.

Meanwhile, the mayor has dropped as the volunteer football coach for Don Bosco Catholic Secondary School.

Councillor Doug Ford, who took no questions following a statement that was mostly a stump speech, did little to address the allegations that have plagued the mayor for almost a week.

“Rob is telling me these stories are untrue, that these accusations are ridiculous, and I believe him,” Ford said.

Stepping in front of a crush of reporters and cameras, the councillor gamely defended his brother as an “honest and hard-working man” who has dedicated himself to the service of others.

But beyond citing his brother’s denials, Ford did little to douse the flames sparked by two reports last week that the mayor was caught on a cellphone video that appears to show him smoking crack and making homophobic and racist remarks.

“I’m not speaking for the mayor. The mayor is my brother. I love him and he’ll speak for himself,” Ford said.

“When?” a reporter interjected, to no effect.

“He’s already addressed these allegations three times—I don’t know how much more he can say.”

In fact, the mayor has done little to refute the allegations from the U.S. website Gawker and the Toronto Star. His only brief comments to date came Friday, when he called them “ridiculous” and suggested the newspaper was out to get him.

Instead, Ford bragged Wednesday about his brother’s achievements as mayor–such as balancing the budget–before lashing out at the two publications in particular and the media in general.

He accused the media of going on a witch hunt that has ensnared the Ford family, reserving his harshest criticism for Gawker.

“To the folks at Gawker: What you are doing is disgusting and morally wrong,” Ford said. “Giving away prizes to try to raise money for drug dealers and extortionists is disgraceful.”

Both the Star and the website reported last Thursday that they had seen—but not obtained—a video made by a west-end drug dealer, who was shopping it around for six figures.

Neither of the reports has been independently verified.

In a blow to the mayor Wednesday, the Toronto District Catholic School Board announced it had dropped Ford as volunteer coach of the Don Bosco Eagles.

Ford, who allegedly referred to the players disparagingly in the video, has long cited the team as an example of his selfless dedication to others.

A statement from the Catholic board makes no reference to the crack cocaine allegations swirling around the mayor. It only says it has decided to pursue a “different direction” with a new volunteer.

“This decision was based on what is best for our students, our school and the Don Bosco community,” education director Bruce Rodrigues said.

The controversy over the alleged crack video has attracted international attention, including several segments on late-night American television that have poked fun at the mayor and Toronto’s staid image.

One segment on “Jimmy Kimmel Live” Tuesday night featured an actor posing as Ford responding to questions about the video reports by saying, “These people are pathological liars.”

Coun. Ford attacked the Star for “questionable reporting,” saying the newspaper had proven it would do anything to stop the mayor’s agenda—something the Star has repeatedly denied.

The media have “no regard” for what they’re doing to the Ford family, the councillor asserted, as he ignored reporters asking when the mayor would talk.

“Never has a Canadian politician, or his family, been targeted by the media this way,” Ford said. “They zealously stalk my mother, my children—the media hides in the bushes at our cottage as they did on the weekend.”

Supporters, rivals, and many outside observers have urged the mayor to address the allegations head on—to little avail so far.

The councillor said his brother has stayed silent on advice of his family and lawyers, and would let the media know if and when he had anything to say.

Police have only said they were monitoring the situation.