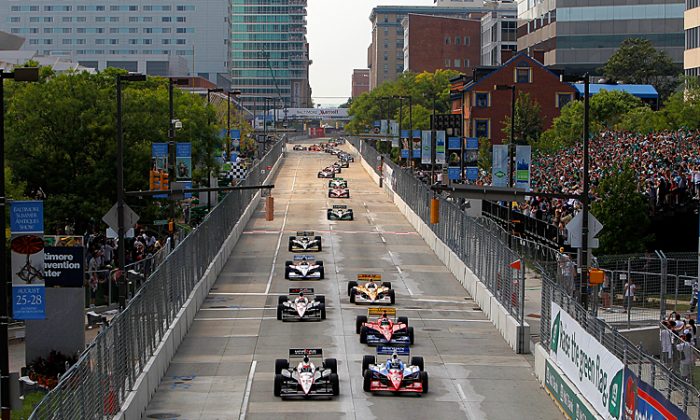 Will Power leads the field during the start of the 2011 IndyCar Baltimore Grand Prix. (Jonathan Ferrey/Getty Images)
Motorsports

A new deal with a new investment group might save the Baltimore Grand Prix. Mayor Stephanie Rawlings-Blake announced on Feb. 15 that motorsports promoters Downforce Racing had a five-year agreement with the city of Baltimore to operate the Labor Day weekend races, pending approval by the city’s Board of Estimates on Feb. 22. During the upcoming week city stakeholders and civic groups will review and comment on the proposal.

Baltimore hosted an American Le Mans Series race and an IndyCar race on Saturday and Sunday of Labor Day weekend 2011, in what all parties agreed was a very successful opening event. However, the promoters, Baltimore Racing Development LLC, failed to pay some suppliers and also failed to pay about $1.5 million in city fees. Their contract was canceled in December 2011.

Despite these setbacks, the city was eager to bring the event back and make it a permanent attraction.

“Last year’s racing event generated $47 million in economic impact for Baltimore and proved very valuable in terms of positive media exposure for our city,” said the mayor in a press release. “We have worked hard to learn from past experiences to ensure that this new agreement is in the taxpayers’ best interest and will bring a successful, world-class sporting event that Baltimore can be proud of for years to come.”

The new promoters, Downforce Racing, have experience operating successful street races in Toronto, Ontario, Canada, and St. Petersburg, Fla., both long-running and profitable events. One of the partners, Dale Dillon of Dillon Racing LLC, led race operations at both those venues as well as at the inaugural Baltimore Grand Prix.

The other two partners, Felix Dawson and Dan Reck of Wilkes Lane Capital LLC, are Baltimore residents with solid histories in investment and financial management.

“Last year’s Grand Prix drew nearly 160,000 fans from around the world to the streets of Baltimore, and the event itself was well received by Baltimore’s citizens and racing enthusiasts internationally,” said Dale Dillon in a press statement. “With prudent business management, this event will be successful for the city and state, and we look forward to working with the people of Baltimore to host a great sporting event that benefits the city and the local economy this year and in the years ahead.”

The new contract calls for city service and impact fees and amusement taxes to be taken out of the cost of the tickets, guaranteeing the city will receive these funds. There is also a revenue-sharing clause, which grants the city 10 percent of profits over $1 million.

The new promoters have promised to work with vendors unpaid by the previous organization to help them profit from the 2012 and future races. The five-year contract also contains an option for a further five years.