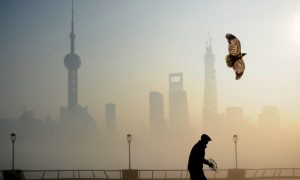 Air pollution is not just an environmental problem in China, but a dire political issue that was given strong focus at the national political meetings held in Beijing last week. Proposals for how to fix the smog choking Beijing were among the most mentioned topics, according to official Chinese reports.

Chinese Premier Li Keqiang was widely quoted saying “We will declare war on pollution as we did on poverty.” The remark was a rehashed revolutionary slogan, meant to show that attacking pollution is a political priority for the Communist Party leadership.

The pressure to fix the problem has fallen onto the shoulders of the Mayor of Beijing Wang Anshun, who was told earlier this year “to bring your head if the air conditions are not fixed by 2017,” according to a report by Oriental Outlook magazine, which is published under Xinhua, the official mouthpiece of the regime.

As one of the cities that is most severely polluted, Beijing will get up to $123 billion from the central authorities to fix the air over the next three years. Another $13.7 billion will be spent on fixing garbage and water pollution in Beijing.

Severe smog has been a problem in China for years, and frequently dominates headlines and discussions in the country. There is especially severe pollution in Beijing because of the coal fired power plants and factories in surrounding Hebei Province.

In just the first half of 2013, the amount of coal burned in Beijing reached 25 million tons, while Tianjin, near Beijing, burned 50 million tons of coal. Hebei Province churned through 300 million tons, according to Chinese press reports.

“The Chinese Communist Party has single-mindedly pursued the growth of GDP for many years,” said Sun Wenguang, a retired professor from Shandong University, in a telephone interview with Epoch Times. “The authorities have vigorously developed chemical industries, causing serious pollution, without considering the effect to people’s lives. Lung cancer cases have been on the rise.”

The Beijing city government said it would spend the budget on reducing coal consumption, limiting the number of cars on the road, and other measures to tackle the pollution and dust in the air.

Details on the proposed spending have not been released, but it will accompany a list of stringent fines for polluting industries that break the rules. Some of the fines are up to $81,000.

On March 1, the Beijing environmental protection bureau began conducting inspections of polluting industries in Beijing, and soon fined a heating company in Beijing $16,200.

The most recent bout of smog in China was from Feb. 21 to 27, and was one of the worst periods in China for some time. Reports said that a seventh of China’s land mass was covered by severe smog, and that most major cities were blanketed with grimy pollution.