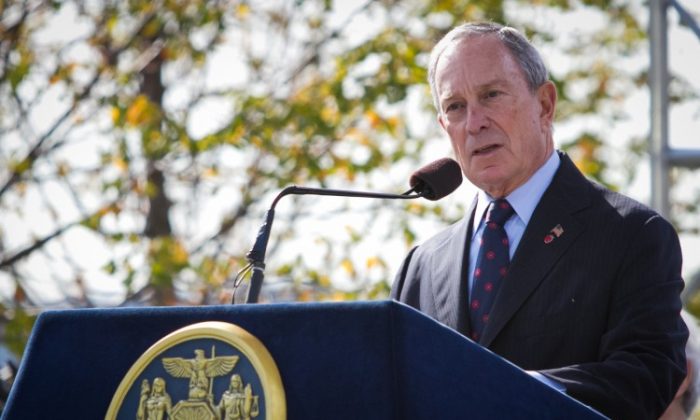 Shino Tanikawa, president of Community Education Council District 2, speaks at a press conference last year. Tanikawa, among the critics of the current school system governance structure, is looking forward to the 2015 sunset date. One of the leading candidates (Scott Stringer, L), looks on. (Zachary Stieber/The Epoch Times)
US

Mayor Has Too Much Power Over NYC School System, Say Critics

NEW YORK—Left out. Many teachers and parents say they have increasingly felt ignored and bypassed, as mayoral control of schools stretches on under Mayor Michael Bloomberg’s third term.

Community education councils and school leadership teams exist as part of the school management structure, but members say their input is not incorporated into the decision-making process, and they often feel ignored. Overall parent engagement is also down, according to the 2012 “Mayor’s Management Report.”

Instead of real engagement, the Department of Education’s idea of parents-as-partners is homework help at home, said Shino Tanikawa, president of Manhattan’s Community Education Council 2.

“We have a lot more to offer than just helping our own kids with homework,” she said. “We want to put educators back in the policymaking positions, because they know what needs to be done, and we want to have parental input and parental voice as an equal partner in policy setting. And we don’t mean one man, or woman, making all the decisions.”

Education councils are staffed by parent volunteers and help to “shape educational policies and priorities in their districts,” according to the Department of Education (DOE).

Merryl Tisch, chancellor of the state’s board of Regents, said the mayor had done a remarkable job retooling and reorganizing what was a broken system when he took the reins, but it needs adjusting.

New York City has a gigantic school system of 1.1 million students, 1,700-plus schools, and a $24 billion annual budget.

“Mayoral control needs to be adjusted, because along the way to giving control of the school system to the mayor, what they forgot to do was find a way to include parents and celebrate communities,” said Tisch at an Oct. 24 talk in Manhattan. “Mayoral control is a new tool, and like every new tool, you start with it and over time you adjust it.”

The DOEs Schools Chancellor Dennis Walcott has emphasized more parental involvement since taking his role almost two years ago. He has just completed the second annual Parents as Partners week, and has announced a November launch of the Parent Academy, which will provide training for parents on a variety of issues.

“The DOE continues to make a concerted effort to include parents in decision-making processes,” said a spokeswoman from Walcott’s office. Critics say efforts like Walcott’s are not enough.

In the 1850s through the 1930s almost every mayor had control of urban public school systems, according to researchers from the Institute on Education Law and Policy, based at Rutgers, in a 2010 report on mayoral control.

A move toward more community-based governance began in the 1920s. But that move reversed in the 1960s, around the time people began advocating for mayoral control over New York City’s school system.

“Elected school boards in the United States used to be regarded as kind of the epitome of local democracy, but at least in large cities [the boards] have sometimes come to be seen as overly amateurish in terms of their knowledge of the education issues, a springboard for politicians that have higher aspirations, and meddlesome intruders into the details of running schools,” said Jeffrey Henig, professor of political science and education at Columbia University’s Teachers College, and an expert in school governance.

Additionally, school boards may be “overly indebted to teacher’s unions who help elect them,” Henig said. “Mayors are seen in comparison to be more likely to be better managers, less likely to be captive by the teachers unions, [and] more inclined to be innovative.”

By the time Bloomberg was elected in 2002, reforms advocated by the four previous mayors—and heavily incorporated by Mayor Rudolph Giuliani with help from the state—had gained momentum. Support for the move to full mayoral control came from the United Federation of Teachers (which received 16 to 22 percent raises, according to the Rutgers report, but are now not officially in favor or against mayoral control); business leaders such as real estate developer Tishman Speyer; and elected officials including then-Sen. Hillary Clinton.

“Under the old Board of Ed, children were abandoned by people who too often put favoritism and patronage first,” said Mayor Bloomberg in his 2007 State of the City address, according to a transcript. “We’ve come a long way in leaving those bad old days behind, and believe me—we’re not going back. Not ever!”

The new system replaced a district-oriented structure. Similar systems of mayoral control have been instituted in various forms in other large cities such as Chicago, Boston, and Washington, D.C.

In some systems board members have set terms (they can’t be fired), which gives some autonomy. Different systems also give parents, teachers, and communities varying degrees of power.

In the city, the strongest form of mayoral control is exercised, including the mayor having control of the school board, known as the Panel for Education Policy, which is made up of 13 members and the chancellor. Each borough president selects one member. Bloomberg selects the remaining eight.

Parents and teachers have very little leverage with regard to school policies, according to the report. “Communities pour into Panel for Education Policy meetings protesting decisions made about schools in their communities, but are summarily ignored by the mayoral appointees,” the report said.

Major decisions are made against the wishes of many teachers, according to the report. More than 94 percent of the 426 teachers surveyed disagree with primarily using standardized test data for evaluating and closing schools.

Groups of parents, teachers, community advocates, and elected officials wanted mayoral control scaled back in 2009, when the 2002 grant of power expired.

But after an initial harried legislative session, many elected officials supported an extension until 2015. The Assembly passed the extension 129 to 18. The Senate passed its version with sponsor Sen. Frank Padavan and other senators praising the success of mayoral control.

The extension came with new requirements aimed at fixing the weak points of the system, including the creation of two new citywide councils (one for high schools, one for special education). Critics have said the requirements are surface level and haven’t enacted much change.

The decision on how to govern the school system rests with the city’s next mayor, to be elected in 2013.

All leading candidates have said they would continue mayoral control, but reform the system.

Republican candidate Tom Allon said, among many other changes, he would begin having contracts drawn with parents at the beginning of the year that lay out their rights and responsibilities, including making sure their children do homework. Students at Stuyvesant High School and their parents are required to sign such statements.

Incorporating feedback from parents is also important, Allon said. “The public school system needs to be a two way system where the parents feel they have input into their schools and school communities.”

Former Comptroller William Thompson, if elected as mayor, would replace the current school board (the Panel for Education Policy) with a nine-member board appointed by the mayor—but the nominees, who would serve two-year terms, would be chosen first by a 19-member committee, including four parents, one teacher, and one principal.

“[Under Bloomberg] parents have been shut out, communities have been ignored. I think this has probably been the worst case scenario,” Thompson said at a forum in April, recorded by Capital New York.

Public Advocate Bill de Blasio believes in slightly more independence for the school board and, if elected, he would increase the role of the community education councils, according to a spokesperson.

“I think there’s a way to do mayoral control right, if there is transparency, if there are clear checks and balances, a forum for debate, and role[s] for communities, local residents, and parents,” de Blasio said at the April forum.

City Council Speaker Christine Quinn supports mayoral control but wants to bring it under the purview of City Council instead of the state Legislature.

“Parents must feel that they can have real input into the aspects of school that impact their children,” she said in a 2009 letter to the state Assembly. Having parents go to their council member is a good way to voice input, she said.

Manhattan Borough President Scott Stringer said he supports accountability but thinks control under Bloomberg has been too divisive.

“The greatest educational success—and failure—of the Bloomberg administration has been mayoral control,” he told City & State.