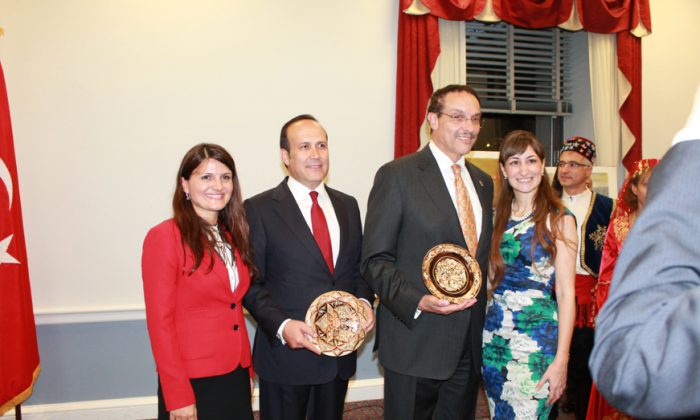 DC Mayor Vincent Gray and Namik Tan, Ambassador of Turkey, pose for a photograph with Demet Cabbar (left) and Salcigil White who are with the American Turkish Association of Washington, D.C. at the opening reception for Turkish Cultural Heritage Month on Capitol Hill Sept. 9 (Tiffany Wu/ Epoch Times)
US

WASHINGTON—DC Mayor Vincent Gray was delighted to speak at the opening reception for Turkish Cultural Heritage Month on Capitol Hill, Sept. 9. In attendance at the reception was the Ambassador of Turkey Namik Tan, Congressman Dan Lipinski of Illinois, and members of the Turkish community.

The capital of Turkey, Ankara, and the District share a sister city relationship.

“The [sister cities] agreement focuses on four areas: being able to share technical expertise in public transportation and urban planning, protecting our environment which is extremely important to us, healthcare, and a number of social projects. Secondly a student exchange… and of course activities in sports and culture,” said Mayor Gray.

Located between Europe and Asia, Turkey has an ornate culinary and arts culture that some say has been shaped by many nations.

“Turkey has stood at the crossroads of numerous civilizations’ thorough history. Our rich history has endowed us with multiple cultural, social and religious identities. Some of which you’ll be able to sample at the second annual Turkish heritage month,” said Ambassador Tan at the reception.

One aspect to sample this month is Turkish cuisine during Turkish Restaurant Week Sept. 13-23.

Hearty meats, stews, vegetables and yogurt are staples of the cuisine defined as a fusion of Central Asian, Middle Eastern and Balkan cuisines, according to the North Carolina Turkish Festival website.

A dish popular in Turkey today, Kavurma, consists of chunks of meat cooked in its own fat, salted and stored in containers to be eaten in the winter months.

Such dishes may date back to the Ottoman Empire.

Yet if Turkish cuisine doesn’t strike your fancy, a walk through the grand bazaar at the Turkish festival in downtown DC on Sept. 29 might.

The festival is a local favorite. The Washington City Paper voted it the best cultural festival in DC alongside the H Street Festival last year.

As visitors delight in rhythms of the drums and bells of Turkish music, the site of women dancing, the smell of fresh kabobs on the fire, the freedom plaza, the stage for this year’s festival may serve as a reminder of the unifying democratic values of Turkey and United States.

“The time tested relations between Turkey and the United States are based on a shared vision as well as common values in democracy, human rights and the role of law,” said Ambassador Tan.