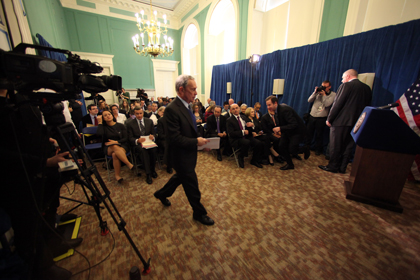 “The biggest issue facing our ability to balance budgets in the future is the enormous growth in pension costs,” said Mayor Bloomberg. “Right now our pension system is fairly described, I think, as ‘a ticking time bomb,’ and we are working in partnership with Gov. Cuomo to diffuse that time bomb.”

Gov. Cuomo on Jan. 17 outlined pension reform in his 2012–2013 Executive Budget and Reform Plan , which proposes creating a new tier in the state pension system that would save the state and local governments outside New York City $83 billion and NYC an estimated $30 billion over the next 30 years.

Both the governor and mayor emphasize the reformed system, if approved, would only apply to new hires. The Citizens Budget Commission calls it a “more flexible pension plan” in a blog post, explaining future employees would be able to choose between “a more traditional defined benefit pension plan with a long waiting, or ‘vesting’ time to become legible for benefits, or a defined contribution, 401(k)-style plan that is used widely in the private sector.”

Pension costs and fringe benefits for the city’s uniformed workers are projected higher than their salaries and wages in the budget. For all city workers, the projected cost is more than 70 percent of pay.

“The bottom line is we just can’t afford to keep doing this,” said the mayor.

The city’s fiscal year 2013 budget has “no tax increases, no layoffs of teachers, or uniformed city workers, and no walking away from our long-term investments,” said Mayor Bloomberg. Other layoffs, both past and future, will result in the city’s workforce between 2012 and 2013 decreasing by 20,478.

The City Council will hold budget hearings with city agencies and the public about the preliminary budget. The mayor presents a revised budget proposal by April 26 to the council. The council holds additional budget hearings and begins negotiations with the mayor.

Before June 5, the negotiations conclude, and the council votes to adopt a budget for the upcoming fiscal year, which begins on July 1.

City funding for most agencies declined in the budget, with the exception of education. After $1.6 billion in state and federal education funding was cut, the city stepped in.

“We chose to reach into our pockets,” said Bloomberg, who also mentioned paying higher salaries to teachers to ensure quality. “That’s the future of our children, and it’s more important than any economic thing short-term. They’re the ones who are going to take care of the rest of us, remember.”