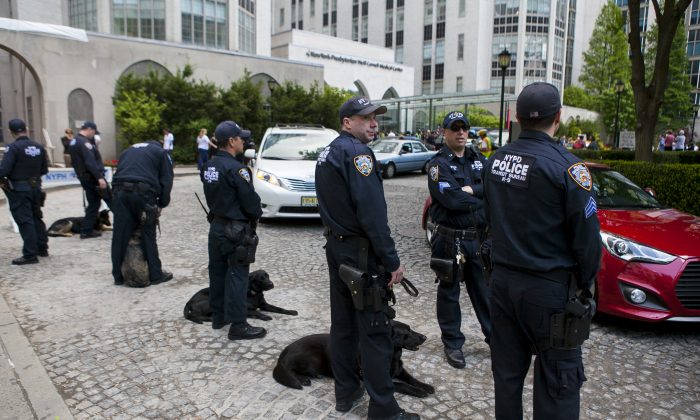 NEW YORK—In the early hours of Dec. 15, the Los Angeles Unified School District, which is responsible for more than 640,000 students, shut down public schools in Los Angeles due to an anonymous bomb threat it had received in an email. But NYC officials believe it was likely that the email came from a prankster.

The NYPD Intelligence Division has been in touch with the FBI throughout the morning, Mayor de Blasio affirmed. The agencies deemed the threat was not authentic.

“It was so generic, so outlandish, and posed to numerous to school systems simultaneously,” de Blasio said at a press conference on Dec. 15. “It’s written in a fashion that is not plausible. … It’s very important not to overreact in situations like this.”

Authorities said there were several details in the email that showed it was not credible. For instance, an actual jihadist would not spell Allah, the name of their god, with a lower case a.

NYPD Commissioner William Bratton said he has been in touch with the Los Angeles Police Department, and noted that it was a mistake for the Los Angeles school system to not consult law enforcement authorities before closing schools.

“I think it was a significant overreaction, yes,” Bratton said. “We see no need whatsoever to take that action here in New York City.”

The same email was apparently sent to schools in a number of major cities, including New York City.

NYC school systems will remain open, even though a superintendent in the New York City school system received a similar threat in the morning. The school immediately contacted NYPD, which investigated the incident through their Joint-Terror Task Force.

The NYC public school system is the largest in the country, with more than 1.1 million students. The Los Angeles Unified School District is the second largest.

New York authorities are currently looking into which other cities received a similar email.

NYPD Commissioner William Bratton believes the email was sent by someone who lives overseas.