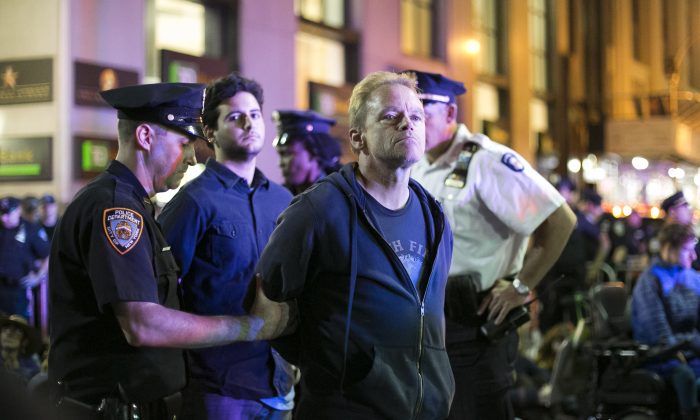 The NYPD arrests protesters during the Flood Wall Street protest at the intersection of Wall St. and Broadway in New York on Monday, Sept. 22, 2014. (Samira Bouaou/Epoch Times)
New York

The protest on Monday that jammed the Broadway thoroughfare near Wall Street and ended with over 100 arrests received warm, if qualified, praise from New York City’s elected officials.

The day after Sunday’s People’s Climate March, hundreds occupied the block surrounding the statute of the charging bull in the Financial District to protest climate change and capitalism. Around 4 in the afternoon, they unsuccessfully marched on Wall Street, as the police had cordoned off the area with barricades in advance.

“This is only a continuation of the big march that took place yesterday [on Sunday],” said Councilman Ydanis Rodriguez, who visited the protest, around 2 p.m.

“I’m here because I believe this is great, beautiful; peaceful movement is so right when it comes to making a case for the importance of having everyone understand that climate change is real,” he said.

Councilman Jumaane Williams was also at the protest to show support for its environmentalist message.

“I’m here because I have two daughters and I want for my daughters to have a safe planet,” he told the Observer.

With the exception of 3 arrests and a few demonstrators being pepper sprayed for trying to cross the barricade, there was little friction between the police and protesters until around 6:45 p.m., when 102 protesters were arrested after refusing to disperse from the intersection of Wall Street and Broadway.

“We had a situation where it was civil disobedience as it’s supposed to be, meaning it was peaceful,” de Blasio stated on Tuesday in a press release, characteristically praising both sides in equal measure.

“I thought the NYPD did a fantastic job allowing the protesters to make their point, but handling the situation with a lot of flexibility and restraint.”

The mayor has a history of civil disobedience himself. During his mayoral campaign last year, de Blasio was arrested while protesting the possible closing of the Long Island College Hospital.

“I think the First Amendment is a little more important than traffic,” de Blasio responded when asked whether he was ok with protesters clogging up traffic.

“Obviously, as New Yorkers, we would like our streets to keep moving along, and we’re going to do everything we can to achieve that. But we have to respect peaceful protests.”

Not everyone in Monday’s protests reciprocated the mayor’s expression of support, as some saw him as a figure of the establishment and a part of what they were protesting against.

“How come de Blasio comes to one parade and sends his goons to another?” one protester asked. “When the real environmentalists show up they give us cops and tear gas.”

The Monday protesters were more radical in their rhetoric than Sunday’s march, with Occupy Wall Street veterans and anarchists among the eclectic crowd. A few carried official placards from Black Rose, an anarchist organization, and other scribbled incendiary messages on the Broadway street in chalk.

“Smoke more weed,” one message read. “Be the dead cop you wanna see in the world,” read another.

The protesters chose Wall Street as the site of their demonstration against climate change because they saw the financial industry as essentially tied to the destruction of the environment.

“Wall Street is the symbolic heart of capitalism; it’s not just we’re against the banking industry, this representative of the capitalist system we think is necessary to dismantle in order to receive climate justice,” said Max Ocean, a student at Ithaca College who came downstate for Monday’s protest.

On the arrests of protesters, de Blasio said that it was a positive, predictable outcome when civil disobedience in the name of a higher cause clashed with the practical needs of the city.

“Those who really wanted to get arrested got arrested. That was their choice. They were given every opportunity to not get arrested, but they chose to,” he said. “But I think these are the kind of issues that bring out incredibly strong passions and they should—this is about the survival of the earth.”