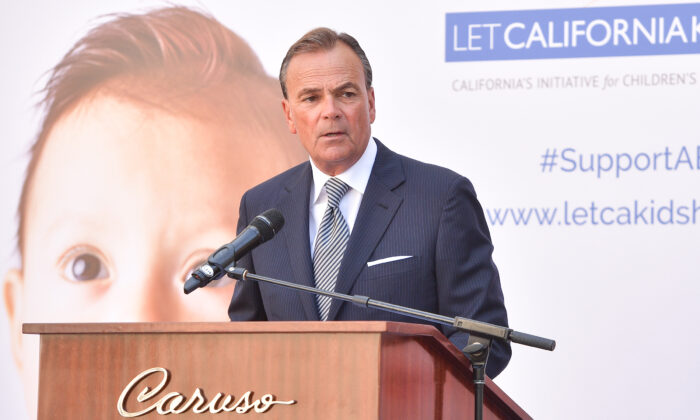 LOS ANGELES—Newly announced Los Angeles mayoral candidate Rick J. Caruso said on Feb. 15 he will step down as chairman of the University of Southern California (USC) Board of Trustees as he turns his focus to campaigning.

The shopping-mall magnate became chair of the USC Board of Trustees in 2018 and served through what he described as a “turbulent time of revelations about our university,” according to a campus-wide message he sent on Feb. 15. He said the board remained committed to restoring trust in the university’s leadership and strengthening the fabric of the community.

“I am grateful for your support, dedication, and partnership over the last four years, as we addressed and resolved tough issues and built a solid foundation for USC’s future,” Caruso said in his message to the campus.

Caruso said he will step down as chairman “once a transition process is completed.”

Carol L. Folt was selected as USC president in 2019, while Caruso was chairing the board. He said Folt and the board worked together to implement critical changes across USC’s campuses, including creating a stand-alone Health System Board, overhauling Student Health Services, and establishing a new EEO-TIX (Equity, Equal Opportunity, and Title IX) office.

“Each of these has been critical to ensuring that our students are protected and cared for, that our employees are held accountable for their actions, and that the horrific events of the past will never be repeated,” Caruso said.

During his board tenure, USC reached a legal settlement with more than 20 women who accused the university’s former longtime campus gynecologist George Tyndall of sexual abuse. Prosecutors said the alleged crimes occurred between 2009 and 2016 involving students between the ages of 17 and 31 who went to USC’s student health center for annual examinations and treatment.

The university was also roiled by criticism in October when USC fraternities were suspended over reports of sexual assault and drugging incidents.

The university was also forced to navigate remote learning and develop safe educational environments for students, instructors, and staff during the coronavirus pandemic.

“Amidst a destabilizing pandemic, President Folt and her leadership team continued the foundational work to improve our culture and lead us into the future,” Caruso said. “From building a world-class leadership team to implementing other crucial priorities, such as an athletics overhaul—culminating in the recent hire of our promising new football coach, Lincoln Riley—sustainability, and a student-centered vision, Carol expects and delivers excellence at every level.”

Folt said in a statement that Caruso has been an inspired board leader, and his passion for and commitment to USC run deep.

“Ensuring the well-being and opportunity to excel of our students, staff, and faculty has always been his guide,” Folt said. “He is known to and respected by so many of you because he is a visible presence on our campuses visiting classrooms, attending town halls, and even showing up to support our athletes and our band members during practice. He has been a hands-on chair and unwavering in his support of our academic mission.”

She noted that the university “never endorses or supports any political candidates,” and USC officials “wish all the mayoral candidates well.”