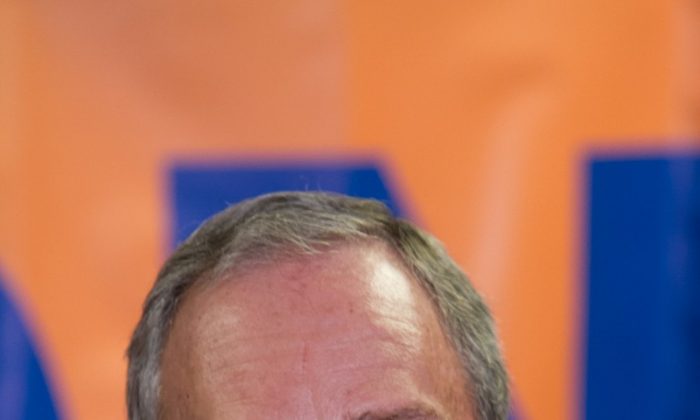 NEW YORK—Mayor Michael Bloomberg has long been lauding the city’s economic recovery to New Yorkers. On Wednesday, he showcased his advice to Washington.

Bloomberg’s speech at a forum hosted by The Economic Club of Washington, D.C. came at an appropriate time. This week marks four years since the Lehman Brothers’ collapse. The Wall Street investment bank’s financial ruin ushered in the worst of the financial crisis.

Bloomberg talked about what the nation could learn from New York City’s recovery process.

“Today, every policy position involves a political calculation: What will this mean in terms of poll numbers, campaign contributions, television ads, endorsements?

“And if you want to know why the recovery from the Great Recession has been as sluggish as it has, the hold that these questions have on Washington I think is a good place to start,” he said.

He said Washington needs to formulate a plan to deal with the deficit and “give us the levels of growth we need,” particularly through employment growth.

“In New York City, we have gained back more than 200 percent of the jobs we lost. So for every job we lost, we have added two more.

“To put that in perspective, if the rest of the country had weathered the recession as strongly as New York City, there would be 12 million more jobs today,” he said.

He said around 12.5 million Americans are unemployed now.

“Everything we do [in New York] isn’t directly transferable to other cities, but it has been working, and a lot of it is copy-able,” he said.

Bloomberg broke down plan his suggestions for recovery as taking a comprehensive approach to improving the business environment. He said offering help to entrepreneurs was important, because most of the job growth in the United States comes from the formation of new companies.

According to Bloomberg, although lowering taxes for small businesses may help, it wouldn’t really encourage hiring.

“The first questions entrepreneurs ask is, ‘Who are my customers and where do I need to be to serve them, and how do I get up and running quickly?’ It is not, ‘Can I afford the taxes?'” he said.

“If the next president and the next Congress spends half as much time discussing how to help entrepreneurs as they’ve spent debating whether upper-income tax rates should be 35 or 39.6 percent, we’ll be a heck of a lot in better shape,” he said.

Bloomberg noted a number of his small business programs, such as the New Business Acceleration Team, which speeds up the approval process for restaurants and retail establishments.

“You have to wonder who in Washington thinks your middle class office worker can run a crane, pour cement, or lift 100 pounds of conduit,” he said.

He also brought up the success New York had seen opening more markets for investment, through both commercial and residential development, especially outside of Manhattan.

“That’s one reason why Brooklyn has become the world’s coolest place. I think it’s definitely too cool for this crowd,” he joked.

Bloomberg recommended that education focus on analytical abilities that the marketplace is demanding. “New York City has begun linking students directly to college and careers through a new partnership with IBM, which turns high school into a six-year experience. Those who graduate not only get an Associate’s Degree, they get an interview at IBM,” he said.

Education, invariably, is connected to immigration. “The fact that we give students a first-class university education and then tell them they have to leave and live in countries that compete against us may be the single dumbest economic policy we have on the books,” he said.

He said while other countries were trying to attract immigrants, the federal government was trying to kick them out.

“I call our immigration policies national suicide. By turning our backs on our history, we are destroying our future,” he said.