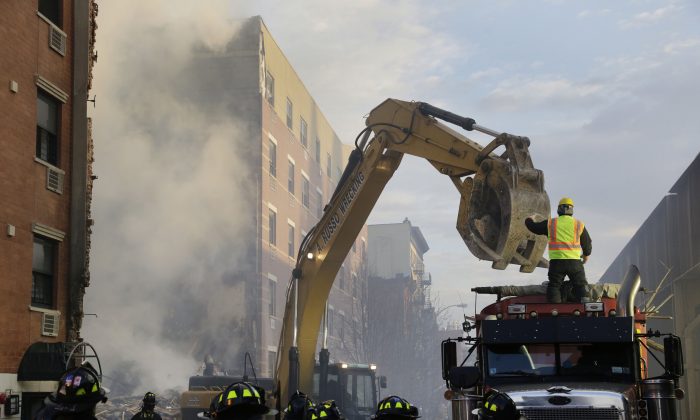 During a morning visit at the site of the East Harlem buildings collapse in upper Manhattan, Mayor Bill de Blasio arrived with Council Speaker Melissa Mark-Viverito along with FDNY Commissioner Sal Cassano, and other emergency response officials.

Heavy-duty evacuation equipment was used to remove the debris of the two collapsed buildings that resulted from an explosion Wednesday morning. Parts of the debris was still smoldering. Firefighters projected streams of water onto the piles.

FDNY Chief of Department Edward Kilduff met the officials at the site. He said that there’s still two and a half floors of debris.

“We have teams that are searching both sides. They follow what the grappler is doing. Then when the grappler brings the materials out, we have teams over here that continue to search,” Kilduff said.

Although 7 people are confirmed dead, the FDNY is still searching for more among the debris, but Kilduff said that he wouldn’t want his response team to go too far back into the debris.

“You have to protect your guys,” de Blasio agreed.

“Our biggest concern now is the free-standing wall in the back. That was a little more solid last night, but it burned overnight,” Kilduff said.

As de Blasio and Mark-Viverito toured the site, they greeted firefighters, among whom was Battalion Chief Joseph Jardin.

“I can only imagine knowing that at any moment you might find a body, how difficult that is … I admire the work you guys do. I really do. It’s not easy. Thank God you do. Thank God you do it,” de Blasio told Jardin.

“Thank you, guys. Thank you very much,” Mark-Viverito reaffirmed.

Ten minutes later, the two made their way to the emergency response tents including the one that houses five rescuers, then another tent housing the Incident Management Team with the planning and finance crews working inside.

Fire Commissioner Cassano handed the two officials a copy of the incident management plans that included instructions for coordination with the police, the fire department, Metro-North, and other agencies.

“It’s our game plan,” Cassano explained to the officials.