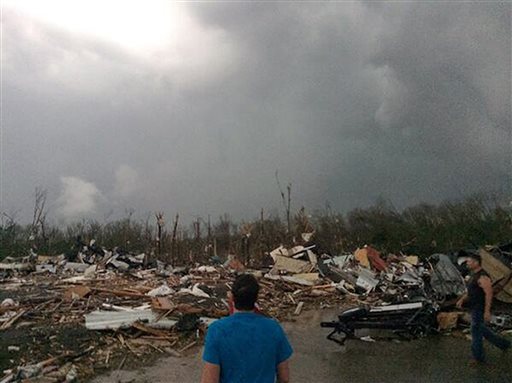 A massive tornado struck Mayflower, Arkansas, on Sunday evening, according to reports. This photo provided by James Bryant shows tornado damage, Sunday, April 27, 2014 in Mayflower, Ark. A powerful storm system rumbled through the central and southern United States on Sunday, spawning several tornadoes, including one that killed two people in a small northeastern Oklahoma city and another that carved a path of destruction through several northern suburbs of Little Rock, Ark. (AP Photo/Courtesy of James Bryant) MANDATORY CREDIT
US

A massive tornado struck Mayflower, Arkansas, on Sunday evening, according to reports.

Accounts posted to Twitter show a huge path of destruction in Mayflower, located near Little Rock.

A weather tracker in Arkansas said there was “major damage and injuries” via Twitter. One person was killed along Highway 365 in Arkansas near Mayflower, according to preliminary reports.

The Arkansas tornado hit about 10 miles west of Little Rock around 7 p.m. local time, moving northeastward for about 30 miles, said the National Weather Service. The tornado didn’t hit Little Rock–the state capital–but it hit several of its suburbs, including Mayflower.

Homes, businesses, and other buildings were leveled in the twister’s path. Maumelle, Morgan, Saltillo and Vilonia were issued tornado emergencies.

The tornado grew to be about a half-mile wide and caused a large amount of damage, The Associated Press reported.

The tornado was part of a storm system that hit the Plains, Midwest and South. About two hours before the tornado hit Arkansas, another one hit the Oklahoma town of Quapaw, killing two, AP reported.

MAYFLOWER, Ark. (AP) — A powerful storm system rumbled through the central and southern United States on Sunday, spawning a massive tornado that carved path of destruction through the northern Little Rock suburbs and another twister that killed two people in Oklahoma and injured others in Kansas.

The Arkansas tornado touched down about 10 miles west of Little Rock at around 7 p.m. and moved northeastward for at least 30 miles, the National Weather Service reported. The tornado missed the state capital, but it passed through or near several of its northern suburbs, including the town of Mayflower, where it destroyed several homes and businesses. Authorities issued tornado emergencies for the nearby communities of Maumelle, Morgan, Saltillo and Vilonia.

There were no immediate reports of deaths or injuries from the Arkansas tornado, but it reportedly grew to be a half-mile wide and caused extensive property damage. Television footage showed buildings that had been turned to rubble and trees that had been stripped bare of their leaves and smaller branches.

That twister was one of several that touched down Sunday as a large storm system moved through a large swath of the Plains, Midwest and South.

Ottawa County Emergency Management director Joe Dan Morgan said Quapaw, which has about 900 residents, was heavily damaged by the tornado.

“Looks like about half of town got extensive damage as well as the fire department,” Morgan said.

Six people were treated for tornado-related injuries at Baptist Regional Health Center in Miami, Okla., said hospital spokeswoman Kristie Wallace. Five of the six were treated and released, and the sixth, who was in fair condition with a broken bone, was kept overnight, she said.

After hitting Quapaw, the tornado moved northward into Kansas and struck Baxter Springs, a city of about 4,200 residents about 5 miles away. Cherokee County, Kan., sheriff’s dispatcher Josh Harvey said the tornado that hit Baxter Springs injured several people and caused extensive damage, but that no deaths had been reported. He said first responders were going from house to house checking on residents’ wellbeing.

Tornadoes also touched down Sunday in other states Nebraska, Iowa and Missouri. Tornado warnings, which indicate the greatest threat of a strike, were also in effect for parts of southeastern Missouri and northeastern Arkansas as of 9 p.m. CDT.

One of Sunday’s twisters touched down northwest of Joplin, Mo., where a massive tornado in May 2011 killed 161 people, injured many others and leveled a large swath of the city. Sunday’s twister didn’t hit Joplin.

The first reported tornado Sunday touched down in a rural area in central in Nebraska. The weather service said it remained on the ground for only a short time, and there were no immediate reports of damage.

Forecasters warned that areas that weren’t hit by tornadoes were still at risk of damage from hail and powerful straight-line winds. Forecasters warned of hail stones as big as baseballs and wind gusts that could reach hurricane-force — 75 mph or higher.

Gusts of up to 60 mph were registered during a story that hit southeastern Iowa on Sunday that damaged several buildings, including a barn that injured someone when it was blown over.

The Missouri Highway Patrol also reported a tractor-trailer was blown onto its side on Interstate 70 about 30 miles east of Kansas City about 1 p.m. No one was injured. The weather service received a report from Plattsburg, Mo., where an anemometer measured 58 mph before it blew away. Golf ball-sized hail was reported at Overland Park, Kan., and Trimble, Mo.

To the southeast, northern Louisiana and Mississippi were bracing for severe storms along with the possibility of flash flooding. The predictions prompted Barksdale Air Force Base near Bossier City, La., to cancel its air show on Sunday. The National Weather Service said northern Alabama could see rain and flash flooding, while central and northern Georgia could see storms and heavy rain.

Sunday was the third anniversary of a 122-tornado day, which struck parts of Mississippi, Alabama, Tennessee, Virginia and Georgia and killed 316 people.