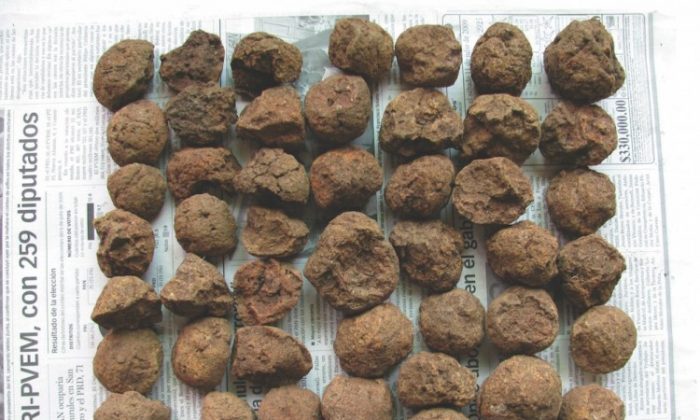 The balls are made of local clay and are over 1,000 years old. (Stephanie Simms/Boston University)
Science

Excavation of a Mayan kitchen in Mexico has yielded numerous fired clay balls that contain microscopic food residue, such as maize, beans, and root vegetables.

Seventy-seven balls about 1 to 2 inches in diameter, and hundreds of fragments were discovered at Escalera al Cielo in Yucatán. They are made of local clay and are over 1,000 years old.

“We propose that the balls were used either in pit oven cooking installations or heated and placed directly into pots containing soups/stews, or perhaps used to keep food warm,” wrote study co-author Stephanie Simms from Boston University in an email.

“We have no direct evidence of a hearth or pit oven—the clay balls appear to be in a storage location on the back corner of a kitchen where they could have been gathered up and recycled/reused—so it is also possible that they were used in another manner, perhaps heated in a cooking fire and placed directly into the cook pot.”

Pit oven cooking times vary from one to two hours up to a day or more. As suitable stone resources in this region were limited, the clay balls could have been used instead.

“This cooking method involves digging a shallow pit, lining it with stones, building a fire on top of the stones and waiting until it is reduced to embers, then placing packets of food wrapped in (maize or other) leaves or whole roots, squash fruits, etc. on top of the heated stones, and covering them with earth and leaves to seal in heat,” Simms explained.

Escalera al Cielo was an upper-class settlement that was occupied between A.D. 800 and 950, and rapidly abandoned at the end of this period.

Very similar clay ball artifacts have been found at nearby sites, suggesting this heating technique was widespread and used by all members of society.

The study was published in the Journal of Archaeological Science.