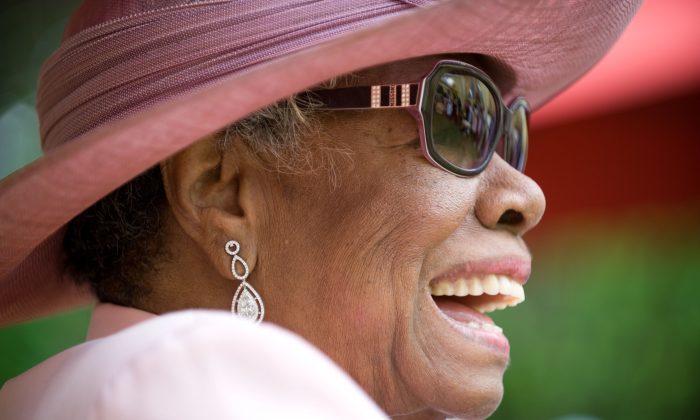 Dr. Maya Angelou attends her 82nd birthday at a party with friends and family at her home on May 20, 2010 in Winston-Salem, North Carolina. Dr. Angelou passed away this Wednesday at 86. (Steve Exum/Getty Images)
News

Hearing Maya Angelou’s voice was like eating a piece of pecan pie. It was dense and sweet, with protein and a hint of salt.

That voice was silenced Wednesday, unless she is regaling everyone at the pearly gates with her poem “Phenomenal Woman”:

I don’t shout or jump about
Or have to talk real loud.
When you see me passing
It ought to make you proud.

She made a lot of people proud. I heard a high school girl recite the poem at a formal event. She embodied the dignity, charisma, and joy Angelou was writing about. I think Angelou wrote that poem as a gift for girls like that.

Angelou’s voice was nearly silenced by an assault when she was a child. For five years she was mute, but did speak to her brother.

However, her fate and her spirit were stronger than that crime. When she died at age 86, she had become a literary giant. Her first autobiography “I Know Why the Caged Bird Sings” is central to the American literary canon, included in many university and high school required reading lists. The reason is her voice.

It’s not meant for younger readers, but it speaks of harrowing events in a tone that is honest, respectful, and compassionate. You feel her kindness toward her suffering child self, yet you also feel her strength. You feel her gratitude toward those who loved her. Because of the detailed description, however, the book was often challenged. It’s a perennial presence on The American Library Association’s annual list of banned books.

Angelou could have embraced despair, addiction, and crime. She chose courage.

“She brought distinction and her unique grandeur to her 32 years at Wake Forest,” said Edwin Wilson, Wake Forest University’s provost emeritus. “And—to the last—she displayed the lifelong courage that she inspired in others: ‘the greatest of all virtues,’ she said.”

What strikes me most about her courage is how much she tried to share it—to encourage others. From “Phenomenal Woman” to “Still I Rise,” to “I Know Why the Caged Bird Sings,” it seems she was trying to draw a map about how to rise, how to be one’s best, true self. She was being an elder in the best sense of the word.

Anyone facing cruelty or discrimination might be buoyed up by her poem, “Still I Rise”:

You may write me down in history
With your bitter, twisted lies,
You may tread me in the very dirt
But still, like dust, I’ll rise.

She credited her entrepreneurial grandmother, “Momma” for teaching her values and ethics. Momma ran a grocery store that was a community center, in rural Arkansas. The theme of teaching, building, mentoring, and giving hope runs throughout Angelou’s varied life.

Angelou was an actress, a poet, a historian, an author, a dancer, a playwright, a civil-rights activist, a producer, and a director, but she said she found her true vocation after Wilson recruited her to teach at Wake Forest. In a USA Today interview, she said, “I’m not a writer who teaches. I’m a teacher who writes. But I had to work at Wake Forest to know that.”

She taught more people than just her students at Wake.

She taught the country about the resilient, loving spirit of African-Americans. Her voice became part of America’s song, the infinitely diverse river of voices poet Walt Whitman described in “I Hear America Singing,” “Each singing what belongs to him or her and to none else.”