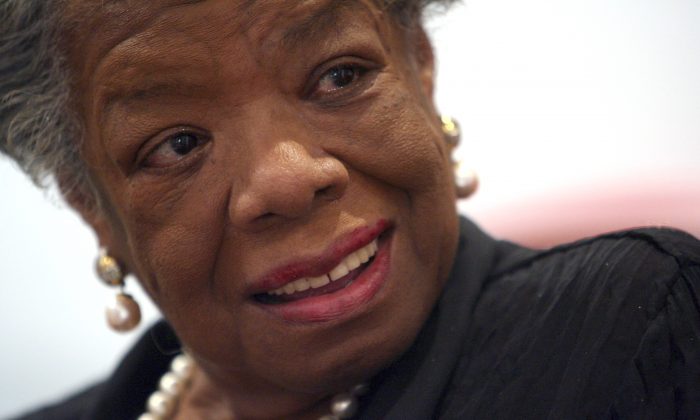 In this March 4, 2008 file photo, American poet and novelist Maya Angelou smiles during an interview with The Associated Press in New York. Angelou has died, Wake Forest University said Wednesday, May 28, 2014. She was 86. (AP Photo/Mary Altaffer, File)
US

Maya Angelou Husband Name and Pictures: Was Famed Poet Married When She Died?

Maya Angelou died Wednesday morning at her home in Winston-Salem, North Carolina, at the age of 86.

Many are wondering whether the famous poet was married when she died.

In fact, she was not–though she was married thrice.

She was married first to Enistasious Tosh Angelou, a Greek sailor and aspiring musician, from 1949 through 1952. After the divorce, she borrowed a variation of his surname and adopted her brother’s nickname for her, Maya, a shortening of Marguerite, and later legally became Maya Angelo, according to the Encyclopedia of Arkansas.

She later married Vusumzi Make in 1960. They were married through 1963 and lived together in Cairo, Egypt. Angelou was the editor of the weekly newspaper The Arab Observer and also took other writing and teaching positions. Make was a South African civil rights activist and lawyer.

Maya and her son left for Ghana as the marriage was ending. It ended in dirvorce.

Her last husband was Paul du Feu, a Welsh writer and cartoonist. They were married from 1973 through 1981. “She never spoke publicly about her marriages, but it has been suggested by those closest to her that this was her happiest,” according to the encyclopedic. “They bought and restored a home in California. Uncomfortable in the setting, she and du Feu divorced in 1980 but remain friends.

Angelou had been a professor of American studies at Wake Forest University since 1982.

The university said in a statement that Angelou was known around the world, and “in the past four decades, she has inspired generations of students to become better writers, thinkers and citizens.”

Her family said in a statement:

“Her family is extremely grateful that her ascension was not belabored by a loss of acuity or comprehension.

“She lived a life as a teacher, activist, artist and human being. She was a warrior for equality, tolerance and peace. The family is extremely appreciative of the time we had with her and we know that she is looking down upon us with love.”