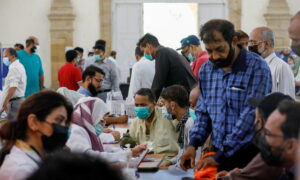 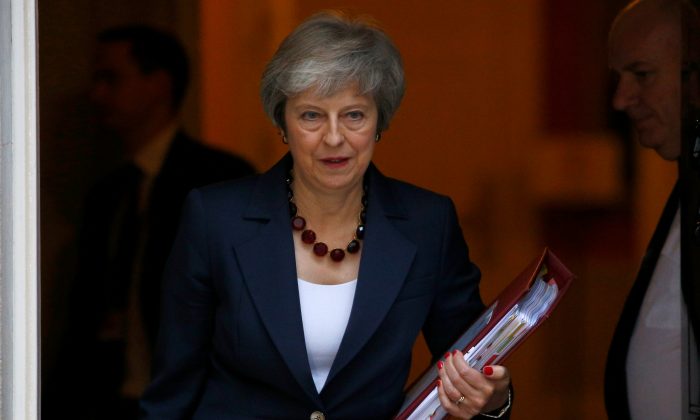 LONDON—UK Prime Minister Theresa May has hashed out a draft divorce agreement with EU negotiators, ending months of fraught negotiations that many doubted could produce a mutually acceptable arrangement.

But to become a reality, the draft settlement must first run the gauntlet of hostile UK lawmaking chambers and the political cogs of the European Union.

The government hasn’t yet published the text of the agreement, but various sources point to it being a “soft Brexit,” similar to the “Chequers deal” derided by many hard-line Brexit supporters in May’s own party for giving too much power to the EU.

Britons voted 52 percent to 48 percent in favor of leaving the 27-member trading bloc in 2016. More than two years later, the UK and EU are separated but still wedded, as they try to reach a divorce settlement before March 29, when the UK cuts treaty ties.

If ratified, the deal won’t mark the end of Brexit, but the start of a new chapter: kick-starting at least a further two years of negotiations on the future trade relationship between the two countries.

May told Parliament on Nov. 14 that a draft agreement with the EU had been reached.

“I’m confident that this takes us significantly closer to delivering on what the British people voted for in the referendum,” she said. “We will take back control of our borders, our laws, and our money, leave the Common Fisheries Policy and the Common Agricultural Policy, while protecting jobs, security, and the integrity of the United Kingdom.”

However, to allow frictionless trade across borders, the deal is expected to keep many features of the current Customs union arrangement and adhere to certain EU rules without the ability to influence them.

‘Tend to Blow Up’

May secured backing from her Cabinet on the evening of Nov. 14.

Anand Menon, professor of European Politics and Foreign Affairs at Kings College London, said that the deal effectively keeps the UK in a customs union. Menon, who is also the director of the UK in a Changing Europe initiative, said that the deal still has many hurdles to pass, such as agreement from EU member states, who make seek symbolic amendments.

“Once prime ministers’ and presidents’ offices get hold of the document, they will find political issues in it that the technical negotiators may have missed,” he said. “EU negotiations always tend to blow up at the end, so don’t be surprised if that happens.”

He expects the deal will gain approval from the EU heads of state, but Menon thinks the most serious challenge lies with the British lawmakers.

May has promised lawmakers a “meaningful” vote on the deal, most likely in December. But with a wafer-thin majority in lawmaking chambers, and around 40 of her own party ready to vote against her, she may have to rely on rebel votes from the opposition party, which is also somewhat split over Brexit.

Even if Parliament agrees to the deal itself, another bill has to be passed–the Withdrawal Agreement Bill.

“The withdrawal agreement bill isn’t going to be rushed through Parliament in a week—it is going to go through the usual process of three readings in the Lords and the Commons. So there’s all sorts of potential trouble in Parliament over that.”

Deal or No Deal

In the event of no deal being struck, on midnight of March 29, the UK cuts all legislative ties with the EU, defaulting to a relationship laid out in World Trade Organization rules.

Most analysts agree that in the short term, the no-deal scenario would be most damaging to the UK economy and is only the preferred option for the most hard-line Brexit supporters.

Menon outlined various scenarios if Parliament rejects the deal: The UK could just drift toward the no-deal scenario; the government could dissolve Parliament, and call a general election; or, the government could allow the consequences of a no deal sink in, and “let Parliament stew while the currency plunges and businesses panic,” before putting the deal before lawmakers once again.

“A second vote would be more likely to pass than a first one,” said Menon.

The deal would put the UK in a holding pattern of the “alternative customs union” until a better plan could be negotiated with the EU.

“The arrangements that will regulate our future cooperation with the European Union have yet to be negotiated,” said Menon. “The Brexit fun is only about to begin!”