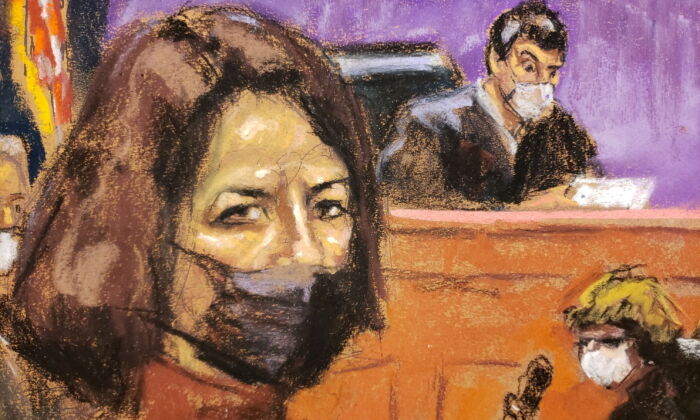 Jeffrey Epstein associate Ghislaine Maxwell sits as the guilty verdict in her sex abuse trial is read in a courtroom sketch in New York City, on Dec. 29, 2021. (Jane Rosenberg TPX Images of the day/Reuters)
Crime and Incidents

NEW YORK—On Jan. 5, the Honorable Alison J. Nathan, the judge who presided over the Ghislaine Maxwell sex-trafficking case in federal court last month, received two requests regarding a juror who served on the trial.

The juror had recently stated publicly he was a victim of childhood sexual abuse and made this known to his fellow jurors during deliberations.

The prosecution requested there be an inquiry of the juror and the defense requested a new trial.

Nathan has responded to the requests, stating in a letter dated Jan. 5, “The Court hereby sets the following briefing schedule for the defense to move for a new trial in light of the issues raised in the parties’ letters”: Defense motion, January 19,  2022; government response, Feb. 2, 2022; defense reply, Feb. 9, 2022.

Maxwell was found guilty of five of the six counts of sex trafficking on behalf of convicted pedophile Jeffrey Epstein on Dec. 29, and four alleged victims testified Maxwell was directly involved in their sexual abuse when they were minors.

The juror, known to the court as Juror No. 50, will be represented by Todd A. Spodek, of Spodek Law Group in Manhattan.