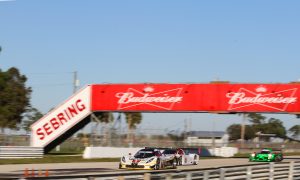 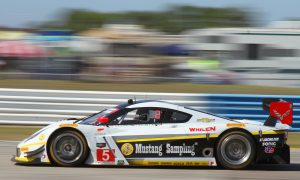 Scott Maxwell and Billy Johnston, drivers of the #15 Multimatic Motorsports Ford Shelby GT350R-C, cruised to victory in the IMSA Continental Ties Sports Car Challenge Circuit of the Americas 150 Friday afternoon, Sept. 16, winning their fourth race of the season and all but locking up the Grand Sport class championship. Maxwell and Johnson have only to take the green flag to take the title.

The #15 Mustang started on the pole, and was never headed until Maxwell pitted for service and a driver change on lap 21 of the 60-lap race. Johnson then kept the big Mustang in the lead through his lap 41 pit stop, rejoined in the lead, and finished the race more than 40 seconds ahead of the #12 Bodymotion Racing Porsche Cayman of Trent Hindman and Cameron Cassels.

Maxwell and Johnson were never challenged, but they were threatened quite seriously by the #33 CJ Wilson Racing Porsche Cayman of Daniel Burkett and Marc Miller. Burkett qualified second but ran third behind the #76 Shelby Mustang of Paul Holton until the end of the first stint, when Burkett forced the Cayman past into second. Miller took over and kept close on the tail of Johnson’s Mustang until the Cayman broke 21 minutes from the checkered flag.

Sarah Cataneo in the #44 CRG-I Do Borrow Nissan Altima traded the ST class lead with Chad McCumbee in the #25 Freedom Autosports Mazda MX5, fighting back after nearly hitting a spinning car and losing several places.

Cataneo pitted from the lead on lap 29, handing off to co-driver Owen Trinkler, who chased Stevan McAleer in the Mazda. Trunkler retook the lead with 50 minutes left in the race, and almost immediately started slowing, eventually parking the Nissan on the side of the course.

McAleer lost third and fifth gear shortly after, leaving the Mazda limping. Andrew Carbonell in the teams other car, the #26, spent the rest of the race pushing the #25 down the straights so it could finish and earn championship points. Enough cars ahead of the Mazda ran out of gas that McAleer finished seventh, preserving the championship lead.