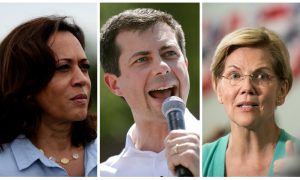 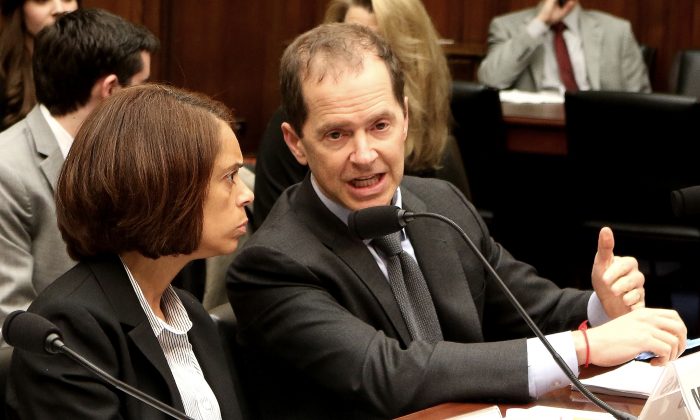 Max Stier, right, president and CEO, Partnership for Public Service (R), testifies at a hearing at the House Committee on Oversight and Government Reform on April 27, 2016. (Gary Feuerberg/Epoch Times)
US News

Max Stier, the man behind the recent, uncorroborated allegations against Justice Kavanaugh was an attorney on Clinton’s impeachment team, opposite Kavanaugh.

The New York Times reporters published the claim based solely on Stier’s account, who they were unable to actually speak to.

Stier’s allegation against Kavanaugh became public in the piece that ran on Saturday, as a part of a newly-published book on the Supreme Court justice. An editor’s note added after publication includes the previously omitted detail that the woman involved “declined to be interviewed and friends say that she does not recall the incident.”

Because of the many holes in the allegations reported in the piece, Stier’s connections and consequently his motives have come into question in the wake of its publication, with conservative critics pointing out that the CEO of non-profit Partnership for Public Service had, at one point, been a member of former President Bill Clinton’s legal team during the Clinton-Lewinsky scandal in 1998, during his tenure with the law firm Williams & Connolly.

“Is that the same Max Stier who was one of Clinton’s defense attorneys? Yes, yes it is,” Sean Davis, the co-founder of online magazine The Federalist tweeted.

The reporters of the NY Times piece say Mr. Stier “notified senators and the F.B.I. about this account, but the F.B.I. did not investigate and Mr. Stier has declined to discuss it publicly. We corroborated the story with two officials who have communicated with Mr. Stier.”

In a Senate session on Sept. 16, Senator Chuck Grassley stated that Stier did not contact him or the team doing the investigation into Kavanaugh last year.

“Now, fast forward to this past weekend and the issues that I and a lot of other members of the Senate are being asked about this very day, just if there’s nothing else going on in this town but you dig up something that happened a year ago. The New York Times published a book excerpt about Justice Kavanaugh’s younger days that has fueled a very fresh rumor from someone whose friends claim contacted senators on the committee.

“That person, Mr. Stier, didn’t reach out or provide information to the committee majority. Apparently he also didn’t provide any information to these writers. It’s only on the word of two anonymous sources that his name and accusation comes up in this story in The New York Times.

“After interviewing eight people related o the Ramirez allegations, not once was Mr. Stier’s name mentioned. Had my staff received substantive allegations or had he approached me or my staff, we would have attempted to take a statement and interview him. But the alleged victim, who also didn’t speak to these writers, apparently does not recall the incident. That’s a point that The New York Times failed to include in its initial coverage.”

“Now it happens that accountability is a cornerstone of democracy,” Grassley concluded.

According to a biography on the Partnership for Public Service’s website, “Stier has previously worked in all three branches of federal government.”

“In 1982, he served on the personal staff of Congressman Jim Leach, while in 1992, he clerked for Chief Judge James Oakes of the U.S. Court of Appeals for the Second Circuit, before going on to clerk for Justice David Souter of the U.S. Supreme Court in 1994.”