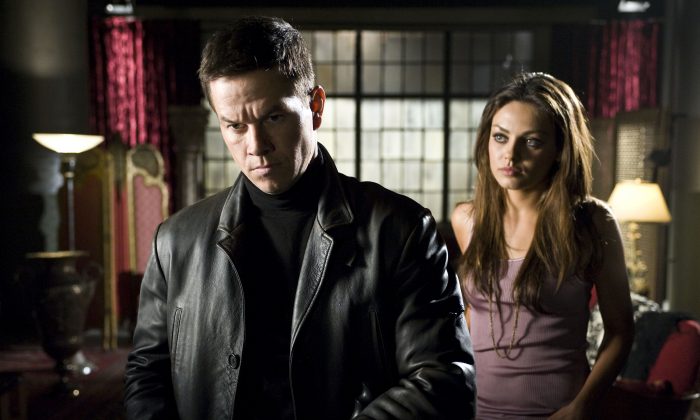 Max Payne is the latest video game to movie adaptation attempting to break a losing streak that stretches as far back as Super Mario Brothers. Signs were good that this brooding Bourne wannabe (are we sick of them yet?), would break the mould with its Faustian elements and A-list action man. But while it’s no Resident Evil style calamity, Rockstar Games’ cinematically suitable pixel punch-up translates into a visually stunning, but progressively dull actioner.

Payne (Mark Wahlberg) is a cop who operates on the fringes of the force, living in the shadows, with the sole motivation to find those responsible for brutally murdering his family. His investigations, assisted by mentor Jim Bravura (Beau Bridges) lead him to the criminal underworld, beautiful femme fatales – Quantum of Solace beauty Olga Kurylenko and Mila Kunis from Forgetting Sarah Marshall – and the ultimate and extremely obvious betrayal. Problem is, by the time you get to the truth, you don’t really care.

Having a genuine box-office draw on hand in the chiselled frame of Mark Wahlberg, an actor so inconsistent in performance quality that he followed his Oscar nominated turn in The Departed with a laughably bad lead in this year’s top turkey The Happening, gives Max Payne a level of intrigue it doesn’t really deserve. The artist formerly known as Marky Mark delivers a muted turn somewhere between those two quality barometers. His brow-furrowing anti-hero is more sulky Sam Spade than the hard boiled neo-noir detective the source material dictated.

It’s hardly Wahlberg’s fault that we are presented with very little from Payne as a rounded character, bar snippets of exposition from peripheral characters. Even then it’s “direlogue” like “Max Payne is looking for something even God wants to stay hidden”. It adds to the doom and gloom of proceedings but removes any audience investment in his investigations.

With a plot that’s straight from a rejected Steven Seagal screenplay it’s up to the arresting visuals in order to find anything to recommend. Director John Moore helmed the tepid Omen remake in 2006 and has an MTV background, so it’s no surprise that the apocalyptic vista is something to behold. Hallucinogenic harpies, a snow peppered palette, and some striking office-based, window shattering action, singles Max Payne out as one of the best looking films of the year.

Definitely one for the boys, this dark tale of babes and bullets reduces its leading man to slo-mo and mumbling, and glosses over the more interesting psychological battles for ones involving gunfire. Don’t the makers know it’s what’s on the inside that counts? And in the case of Max Payne, it’s as hollow as one of the many shotgun chambers emptied throughout the film.