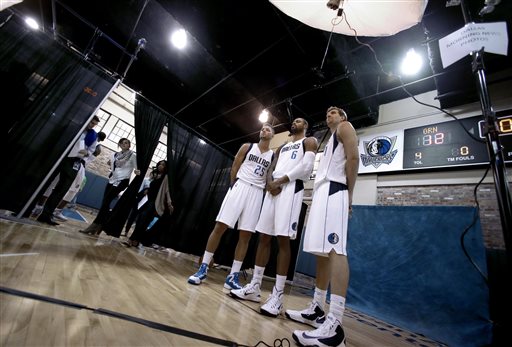 The Dallas Mavericks recently held media day and the news and rumors have ramped up ahead of the start of the season.

Chandler Parsons avoided much of the scrutiny when the Houston Rockets lost games last season.

He is hoping for a more prominent role in Dallas, even though the locker room has strong leaders with Dirk Nowitzki entering his 17th season and Tyson Chandler rejoining the Mavericks after playing a vital role in the franchise’s only championship in 2011.

The 25-year-old Parsons says he is ready to step out of the shadow of James Harden and Dwight Howard. That doesn’t mean he’s storming in and taking over somebody else’s team after signing a $46 million, three-year offer sheet that the Rockets declined to match.

“I’m not trying to come here and get mine and be the go-to guy necessarily,” Parsons said at media day Monday on the eve of training camp. “Coming here, looking at the options, I loved the core that they had. I thought with that core … I could come in and I could really help them out.”

The Mavericks were the eighth seed in the West last season after a 12-year playoff streak ended in 2013, but they took San Antonio to seven games in the first round before the top-seeded Spurs went on to their fifth title since 1999.

Led by the return of Chandler, but supplemented by the additions of Parsons, point guard Jameer Nelson and veteran swingman Richard Jefferson among others, the Mavericks believe they are the closest they’ve been to title contention since winning it all.

Parsons was easily the most expensive addition — about $6 million more per season than the three-year deal Nowitzki signed.

He will be a small forward counted on for 3-point shooting, passing and athleticism around the rim. He will even slide into Nowitzki’s spot at power forward when the 7-foot German goes to the bench, likely to be more often than ever with Nowitzki turning 36 this past summer.

And when the games end, Parsons will be ready for the questions.

“A lot of times, Rockets win, Rockets lose, it was all on James and Dwight,” said Parsons, who averaged 14.1 points, 5.2 rebounds and 3.3 assists per game in three seasons with Houston. “When I’d have a big game, they’d talk about me. I’m ready for that next step of my career. I’m ready to come here and have a bigger role, be more of a leader and that’s why I came here.”

Dallas Mavericks Chandler Parsons (25) laughs with Tyson Chandler (6) after they joked about people confusing them based on name during NBA basketball media day in Dallas, Monday, Sept. 29, 2014. (AP Photo/LM Otero)

The Mavericks, spurned by Howard a year ago when he chose Houston, had to go high with their offer on Parsons after Carmelo Anthony and LeBron James didn’t come anywhere close to relocating to Dallas.

Owner Mark Cuban doesn’t think he overpaid, and he’s not expecting Parsons to be the team’s next 20-point scorer even though he’s right alongside Chandler as the two highest-paid Mavericks.

The focus is on getting back to championship contention after Cuban chose to break up his title winner instead of sign Chandler to a long-term contract that he was afraid would impose strict financial limitations on the team.

As much as Dallas is buzzing over the return of the spiritual leader of the title team, Parsons and Ellis are likely to cause the most trouble offensively from the perimeter — and by taking the ball to the basket.

“He’s still not in his prime. He can still get a lot better,” Nowitzki said. “But we like what he brings to the table and that’s his versatility. He’s going to be in a lot of situations for us.”

And Parsons says he’s ready for it.

If the players behind Chandler and Nowitzki don’t play well, a trade could be in the cards.

That’s according to Jabari Davis of Basketball Insiders.

“If anything, we may have to wait and see what guys like Brandon Wright, Ivan Johnson and Greg Smith can provide as reserve bigs,” he said.

“That could be an area that needs to be addressed if a couple of those guys simply didn’t pan out or were to get dinged up.”

Cuban Jokes About Being ‘A Bully’

“I am a bully,” Cuban said, smiling, reported ESPN. “I just can’t help myself.”

Cuban is a villain to some, including Houston Rockets general manager Daryl Morey, who criticized Cuban in a recent interview.

Cuban has also long been hated in San Antonio, for criticizing the alleged uncleanliness of the River Walk several years ago.

Morey told Yahoo that Cuban is “directing his bully pulpit onto us” because the Spurs aren’t an easy target.

“See, that’s Daryl, right?” Cuban said. “He doesn’t really have a concept of what’s really happened in life. I mean, anybody who’s walked by the river … Let’s put it this way: I don’t go close to the river for fear I’ll be pushed in.”

Cuban has been jabbing the Rockets for over a year, which he says started after Morey sent him a text inquiring about Nowitzki’s availability after Dwight Howard chose the Rockets over the Mavericks.

“The only reason I’m even responding is because I respect and like Daryl, who’s smart,” Cuban said. “He’s got some Donald Trump in him where he doesn’t really understand media all that well, but he’s a smart guy and one of the smartest general managers in the league. So we can have some fun going back and forth.”