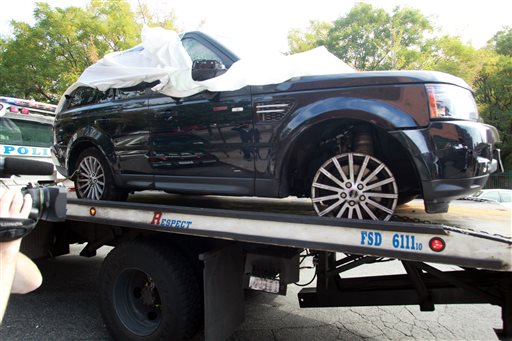 The Range Rover involved in the biker attack is being moved from the police precinct for further police investigation Saturday, Oct. 5, 2013 in New York. (AP Photo/David Karp)
Crime and Incidents

Matthew Rodriguez, an  internal affairs officer with the NYPD, has admitted that he was with the bikers who attacked an SUV driver in Manhattan nearly two weeks ago that was captured in now-viral video footage.

Rodriguez admits that he was riding on the West Side Highway when bikers attacked driver Alexian Lien’s vehicle while his wife and child were inside. According to DNAinfo, it is unclear if he actually partook in attacking Lien.

He waited around a week-and-a-half before admitting he was there.

Another NYPD officer, detective Wojciech Braszczok, was arrested for taking part in the assault. He allegedly smashed the back window of the SUV.

“Obviously, the key issues here are why the officer, if he was aware of anything going on that could be criminal conduct or even if he was at the scene of the crash, why he didn’t take some police action. And as somebody who works in internal affairs, it’s actually an extraordinary turn of events,” DNAinfo police reporter Murray Weiss told CBS.

Rodriguez, 28, is the third police officer that was identified who allegedly took part in the incident.

Another biker, 31-year-old Jason Kuehne, was arrested this week. The Manhattan district attorney’s office said that he helped break the SUV’s back window.

DNAinfo described Rodriguez as a five-year veteran assigned to the Internal Affairs Bureau’s command center around a month ago. He faces punishment from the NYPD for failing to come forward and other charges.