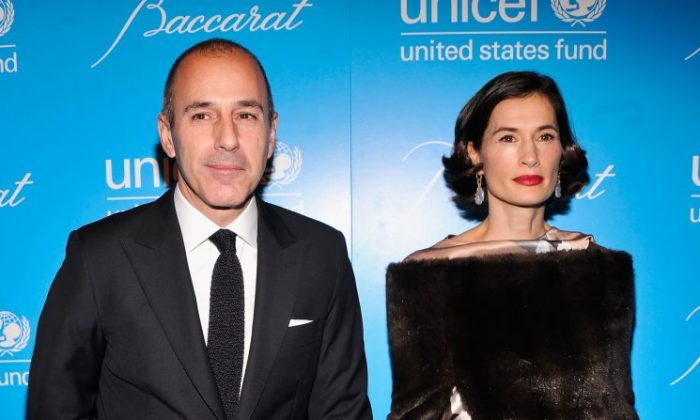 The wife of disgraced “Today” show host Matt Lauer has ditched her wedding ring and is planning for divorce, Fox News reported citing the woman’s father.

Annette Roque, a former model from the Netherlands, left the couple’s home in New York and flew to the Netherlands after several women accused Lauer of sexual assault and harassment.

She was seen back in New York for the first time on Wednesday while dropping her children off at school in Sag Harbor, New York. Roque’s wedding ring was missing.

Roque has remained silent since Lauer’s scandal broke, but her father made telling comments about the couple’s future.

The father added that his daughter feels “shocked” and “is now having sorrow for her children.” The father also denied reports that she’d fled to the Netherlands.

“The situation is so bad. I have met Matt, he was a nice guy,” Henri Roque said. “I feel kind of betrayed. It’s my own daughter. I don’t know how the kids are doing.”

Roque met her husband in 1997 on a blind date and married him less than a year later.

Lauer was fired after a slew of gross sexual misconduct allegations were exposed in a Nov. 29 Variety report.

A telling detail was that Lauer had a button installed on his desk that could lock the door to his office, multiple sources said.

Lauer was the latest in a growing list of celebrities of the movie and television industry disgraced by sexual misconduct allegations recently, including Harvey Weinstein and Kevin Spacey.

Tom Ozimek and Petr Svab contributed to this report.