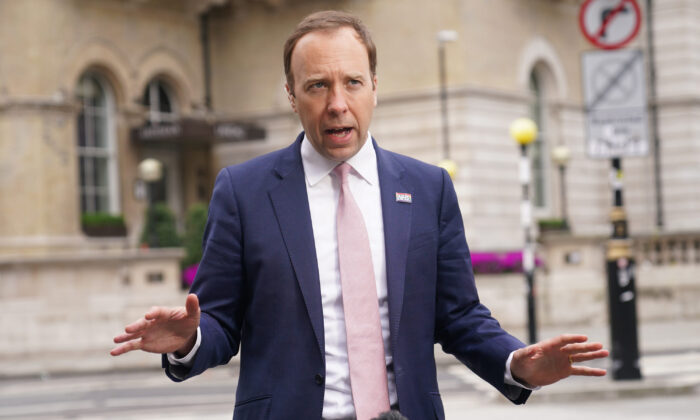 After being accused of cronyism, Hancock said that he didn’t have anything to do with awarding the contract and that it was “perfectly reasonable” for him to forward the message.

Newmark emailed Hancock on May 27, with a proposal attached saying he “had links to a ‘well connected and powerful’ person in China but needed government help in accelerating deals,” The Sunday Times reported.

According to the report, Hancock reportedly replied within hours, saying: “Thanks. Definitely one for the PPE team who are firing on all cylinders now.”

The Sunday Times said the information was obtained under the Freedom of Information Act.

The report said Hancock’s aide subsequently forwarded the proposal to Lord Paul Deighton, who was in charge of producing PPE, after Newmark asked if “someone internally” could “please lead the charge in trying to seriously explore this option.”

In the email to Deighton, Hancock’s aide called the proposal “excellent” and said the health secretary and him/her “would be very grateful if Lord Deighton could look into [it] urgently.”

The newspaper said the Department of Health awarded a £178 million ($250 million) contract for protective goggles to the firm on June 1, with emergency powers enabling contracts to be directly awarded rather than through tenders.

Speaking to the BBC on Sunday, Hancock said it was “absolutely appropriate” for Newmark to lobby him, and “perfectly reasonable” for him to send it on.

“It was absolutely appropriate for people to get in contact with anybody at the Department of Health when the country desperately needed PPE,” Hancock said.

“Of course when somebody approaches the Health Secretary in the middle of a pandemic when you’re desperately short of PPE, it’s perfectly reasonable for the Health Secretary to send on the email and say can we have a look at this, and then I didn’t have anything to do with the signing of any of these contracts,” he added.

Questioned if Newmark received special treatment, Hancock replied: “No, I just pinged it on.”

Hancock said the process was open to everybody to get “high quality offers” quickly.

“By the way, 90 million goggles later, I’m glad that I did,” the health secretary told the BBC.

On March 17, Hancock said the CCP virus pandemic had exposed weaknesses in the UK’s supply chain model, as “every country around the world queued up for PPE and other vital goods from China and a small number of other mass-producing countries.”

Before the CCP virus epidemic become a pandemic, PPE had been sent in bulk to China from different countries.

Peter Navarro, White House trade adviser during the Trump administration, had accused the Chinese regime of hoarding PPE to profit from the pandemic, on top of covering up the CCP virus outbreak in China, resulting in a global pandemic.

PA, Alexander Zhang, and Jack Phillips contributed to this report.