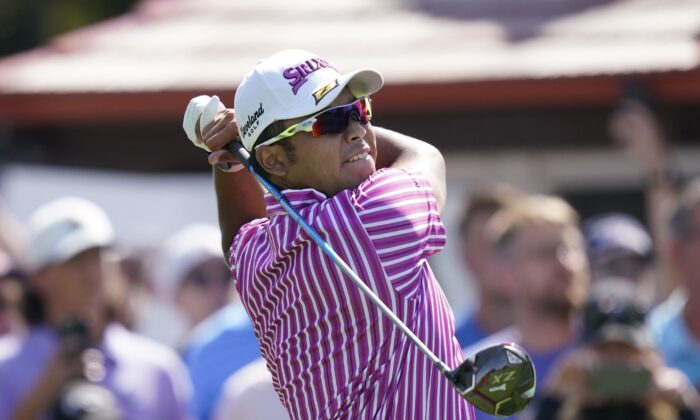 Hideki Matsuyama of Japan drives off the third hole tee during the first round of the Rocket Mortgage Classic golf tournament, at the Detroit Golf Club in Detroit, Mich., on July 1, 2021. (Carlos Osorio/AP Photo)
Golf

Matsuyama Among 3 More Players to Withdraw From British Open

ST. ANDREWS, Scotland—Three more players withdrew from the British Open next week at Royal St. George’s, a growing list that includes Masters champion Hideki Matsuyama, who was concerned about practice time and travel.

Two-time Masters champion Bubba Watson and former British Open champion David Duval also withdrew Sunday. That brings to 13 the number of players who had been planning to play but withdrew.

Matsuyama tested positive for the coronavirus during the Rocket Mortgage Classic last week in Detroit and has been self-isolating. He remains symptom-free, though subsequent tests have come back positive.

“I’m feeling fine but haven’t been able to practice in preparation for the Open,” Matsuyama said in a statement released by the R&A. “Combining that with the difficult travel to the U.K., my team and I have decided it’s best to withdraw to ensure everyone’s safety.”

Watson had to withdraw after he said he was in close contact with someone who had a positive COVID-19 test.

“While I am vaccinated and have passed the required pre-travel COVID test, not enough time has passed for me to comfortably join the charter flight and risk exposure to the other players and personnel on board,” Watson said in a statement on Twitter.

The R&A did not say why Duval chose to withdraw. He won the British Open in 2001 at Royal Lytham & St. Annes.

Harold Varner III, Brendan Steele and John Catlin, the Californian who plays exclusively on the European Tour, have taken their spots in the field.

Seven players from the top 75 in the world ranking will not be Royal St. George’s, with Matsuyama (No. 18) the highest ranked.