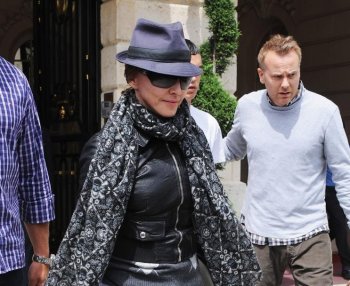 Material Girl Madonna has recently arrived at the City of Light to direct her latest film, W.E.

While shooting on Saturday in Paris’ tony 6th district, the 51-year-old singer was dressed in black from head to toe, wearing a patterned scarf, a hat, shades, and a leather jacket.

The film, co-written by Madonna and Truth or Dare director Alex Keshishian, involves the Duke and Duchess of Windsor and flashes back and forth between pre-World War II England and New York in 1998.

Madonna made her directorial debut with Filth and Wisdom in 2008. That film tells the story of a Ukrainian punk rocker.