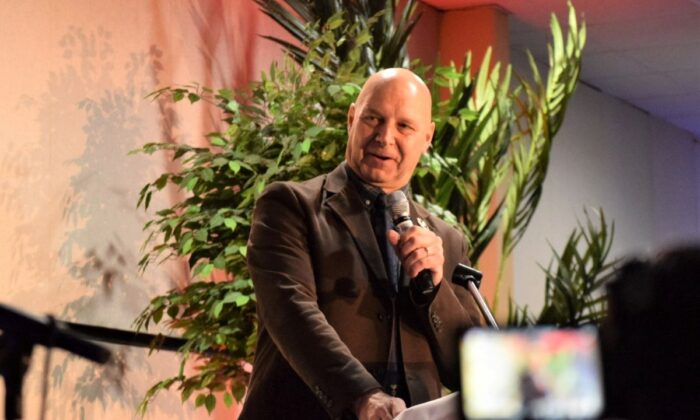 Pennsylvania Sen. Doug Mastriano was scheduled to meet Tuesday with the Jan. 6 Select Committee, but just two people showed up to grill him: one staffer, senior investigative counsel Dan George who did all the talking for the committee; and Rep. Jamie Raskin, a Maryland Democrat who smiled but never turned on his microphone, according to Mastriano’s attorney Timothy Parlatore.

Mastriano, who is the GOP candidate for Pennsylvania governor, attended with Parlatore.

In an Aug. 5 letter, Parlatore told the committee Mastriano has nothing to hide and would appear for a deposition under certain conditions, including the committee getting a ranking minority member designation from the Republican Steering Committee, and if he could record the hearing to prevent tricky editing that might manipulate the true conversation.

“Given the committee’s demonstrated propensity for releasing edited clips of interviews without the requisite context to support a false partisan narrative,” Parlatore wrote, “I am concerned that there is a risk that your committee will do the same to Senator Mastriano.

“Members of your party like Sean Patrick Maloney, Democratic Campaign Chair, have openly admitted that the goal of the hearings you are conducting is intended to paint the Republican party as irresponsible and power hungry ahead of the midterms.

“For this reason, my client has legitimate concerns that your committee may attempt to influence the outcome of the Pennsylvania state elections through the dissemination of disinformation.”

The committee refused to allow a recording by Mastriano’s team.

Mastriano attended the Jan. 6, 2021, rally in Washington with numerous other people. He did not enter the Capitol and has not been charged with anything. Former President Donald Trump endorsed Mastriano in the primary. His high-profile campaign against Democrat candidate Josh Shapiro, Pennsylvania’s attorney general, has attracted national attention.

Not Quite a Deposition

The video call with George started with a discussion on procedures.

“I asked several questions to ensure that they had complied with the House rules to be able to legally conduct the deposition,” Parlatore told The Epoch Times, adding that George refused to answer his questions.

“The first question was, ‘Is this subpoena even signed by Thomson? Because the signature looks identical to every letter that he sent me. So did he actually, personally sign this, or was this some staffer using an autopen?’”

Parlatore was referring to Rep. Bennie Thompson (D-Miss.), chairman of the Jan. 6 Committee.

Another question was about how the deposition would run. Under the rules, depositions are supposed to be conducted with two staffers, one from the majority and one from the minority. They go back and forth in one-hour rounds.

No one from the minority Republicans was present. Parlatore asked who was designated to do the rounds.

“They refused to answer that,” Parlatore said. “And then I told them, ‘look, it appears that you guys have not complied with the rules. We are going to leave. Whenever you guys can comply with the rules, let me know; we’ll come back. If you guys decide to work with me and try to work out the terms of a reasonable voluntary interview, we’ll come back. Otherwise, have a nice day.’ And then, this staffer turns, and starts asking my client questions.”

Parlatore says he asked George what he was doing, and says he was told that they could not leave because the deposition was now started, as a question had been asked.

“I asked him, ‘If the deposition is started, don’t you normally have to swear in the witness first?’”

George indicated that he had forgotten to swear Mastriano in.

Next, Parlatore will ask for a judgment in U.S. District Court, Washington, D.C., challenging the committee’s authority to conduct depositions. A filing is expected within about a week.

Parlatore’s name has been floated as a possible representative for Trump in the recent FBI raid on his Mar-a-Lago home, although Parlatore would not confirm nor deny his involvement.

But he says he is not normally a political attorney. He has a background in criminal law, and spoke through that lens about the committee.

A spokesperson for the committee did not respond to a request from The Epoch Times for comment.