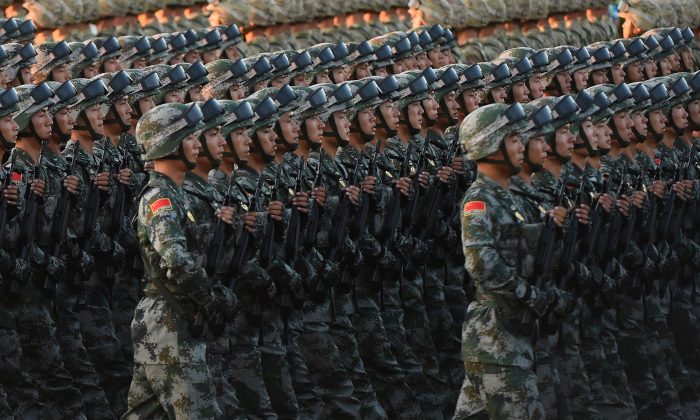 Chinese soldiers conduct a practice at dawn ahead of a military parade later in the morning at Tiananmen Square in Beijing on Sept. 3, 2015. (Greg Baker/AFP/Getty Images)
Opinion

Masters of Psychological Warfare: How the Chinese Are Winning a Secret War

The comprehensive nature of issues discussed during Xi Jinping’s visit once again illuminated the extent of China’s political and social influence in the United States. On Oct. 6, The Heritage Foundation, in cooperation with The Project 2049 Institute, cosponsored the public program event “Influence Operations: Chinese Political Warfare in East Asia and Beyond.”

The event featured a panel of Heritage and Project 2049 policy experts.

The panel concluded that China’s regional and global sociopolitical influence has not come about accidentally. China’s ascension to the world stage has been marked by a pattern of strategic, psychological maneuvers. This pattern is part of a broader set of political warfare efforts, known as the “three warfares”: psychological, legal, and public opinion warfare.

Through a variety of methods, the Chinese have sought to gain influence over the minds of their rivals. With influence over the perspectives of nations and individuals, China can effectively create social and cultural conditions that are advantageous to the Chinese regime’s political and military goals. While the strategic nature of China’s influence operations remains a process that is primarily overseen by the Chinese military and government, the agents of its maneuvers are not limited to state actors.

Non-state actors have an important role in Chinese influence operations, particularly in those operations aimed at shaping the American perception of China. One example of this dynamic is the evident success of Chinese influence operations on the American perception of China’s cyberwar capabilities. The Chinese government has denied all accusations of officially engaging in computer hacking against the United States.

Regardless of whether these attacks are official military operations or the work of non-state actors, the Chinese government has intentionally placed a real fear of cyberattacks into the American psyche. The ever present threat of computer hacking and cyberattacks originating from China can erode the American sense of security. The past decade of countless cyberattacks on small businesses and the more recent major corporate and government hacks have left Americans asking, “Are we still safe?”

Perceived power can be just as effective as actual power. At the end of the day, China’s cyberwar capabilities are largely unknown. China’s capabilities might live up to the fearful American perception, but then again, they might not. Therein lies the success of China’s influence operations.

The first response to China’s influence operations is clear: The United States cannot expect to win a game that it refuses to acknowledge.

Having recognized the threat, the United States should adopt a resolute stance against China’s activities through more robust foreign policy and not rely on bilateral agreements to resolve national security problems. The Obama administration has failed to set the necessary precedent of strength in American foreign policy interactions, further damaging the American sense of security and increasing the effectiveness of Chinese influence operations.

Convincing China to cease what is arguably its most effective (and lucrative) influence operation will require vigorous action. Increasing pressure on the People’s Republic of China (PRC) through targeted sanctions or strategic positioning of U.S. naval forces in the South China Sea would send a clear signal to the Chinese government that the United States will not let this cyberthreat continue.

Thomas Whittaker is currently a member of the Young Leaders Program at The Heritage Foundation. Copyright The Daily Signal. This article was previously published on DailySignal.com