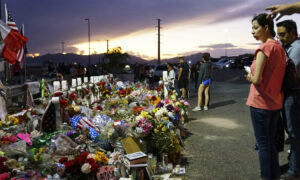 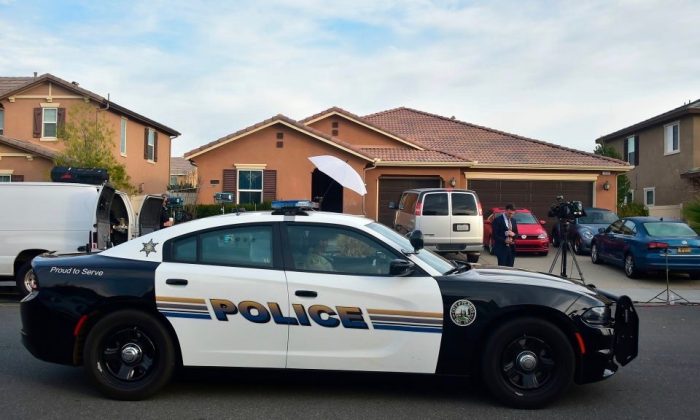 A San Diego County man pleaded not guilty to weapons and child endangerment charges after posting videos online of himself allegedly simulating a mass-shooting. Steve Homoki, 30, recorded the videos in a hotel room across the street from a federal court building. The videos include footage of him pointing a real gun at people on the street through the window and pretending to shoot.

Homoki was arrested Dec. 5 at his home in Spring Valley, Calif., where San Diego Police Department investigators seized 14 registered firearms—including two assault rifles. He was taken into custody and arraigned Dec. 9.
The two videos, posted on YouTube in September, show Homoki in a room at the Sofia Hotel in San Diego, where he stayed one night in March.

In the room are several guns, magazines, and bullets. Homoki talks to himself and aims assault rifles through the window at pedestrians. He loads guns and crawls around on the bullet-strewn carpet.

“Jams, boom,” Homoki says as he loads a handgun.

“One down, more to go,” he continues in the video after pulling the trigger of an unloaded rifle.

He later grabs another assault rifle, jumps on the bed and appears to act out an imaginary attack on himself, according to the affidavit cited by CBS News.

The videos also showed two assault-style rifles on a couch with a female mannequin head and a U.S. Department of Homeland Security license plate, according to the affidavit.

Although he meant to post the videos privately on his YouTube channel, somehow they went public, Homoki said in a KFMB-TV jailhouse interview.

“Obviously, looking back, it looks like if anyone else were to see it—it doesn’t look good. It seems to me it got blown out of proportion,” Homoki said in the interview.

The videos were posted online between Sept. 17 and Sept. 18 under the username “Steven Anderson,” according to the local CBS affiliate, San Diego News 8. One of them was titled “consensus” with the caption “nothing is real” and the other was titled “wwjd” and captioned “Everything is fabricated for entertainment and none of these are intended for any audience. This is a private video. Shall not be published online for anyone to view and this is satire and not in any way shape or form to be taken seriously. Should children with toy guns deserve to get shot?”

Homoki said he never intended to hurt anyone, and that he doesn’t see the correlation between his videos and the 2017 mass shooting in Las Vegas. In that shooting, lone gunman Stephen Craig Paddock opened fire on a crowd of concert-goers at a country music festival on the Las Vegas Strip below his Mandalay Bay hotel room. Paddock killed 58 people and injured hundreds of others before shooting himself.

When asked in the interview why he shot the videos, Homoki said: “It was a kind of curiosity. It was just kind of like a miniature art project for myself—just to kind of get into a mindset and just kind of booked it out for a night in a hotel. I just wanted to relax, maybe do something fun and different.

Homoki was arrested about four days after San Diego police received an anonymous tip from someone claiming Homoki had “gone off the deep end,” and that he had “slowly become less stable” over the last year or so. The tipster, who had been watching the suspect’s online behavior, alleged that Homoki had been “planning something” or already had a plan, according to court documents cited by Fox 5.

San Diego’s Joint Terrorism Task Force was called in to investigate the allegations and arrested Homoki on suspicion of possession of an assault weapon, possession of a high capacity magazine, and child endangerment at his Spring Valley home, where police seized the firearms. He was later charged with the alleged crimes.

At Homoki’s arraignment hearing, Deputy District Attorney Wendy Patrick urged the judge to consider the “simulated rehearsal for a mass shooting” when deciding whether or not Homoki poses a threat to public safety, according to the Associated Press.

Homoki has no prior criminal record, according to his court-appointed lawyer, Ray Aragon. However, the affidavit said Homoki was considered a suspect for stalking an ex-girlfriend in November 2017 and for embezzling from his brother in July.

If convicted on all charges, Homoki could face up to 10 years and eight months in prison. His next court appearance is scheduled for Dec. 18.