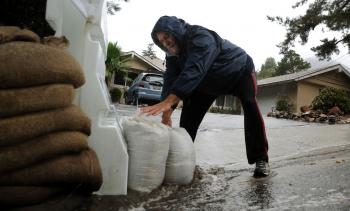 TROUBLE: Dan McLathan places sandbags outside his house, as heavy rain raises the possibility of flooding and landslides in Los Angeles on Dec. 7. Los Angeles police were to go door-to-door notifying the affected residents. (Mark Ralston/AFP/Getty Images)
US

Jack Phillips
Breaking News Reporter
Jack Phillips is a breaking news reporter at The Epoch Times based in New York.
View profile
Follow
biggersmaller
Print
California and Arizona were besieged with a powerful winter storm on Monday, bringing snow into areas like Sacramento and Danville, California, for the first time in decades.

The West Coast is experiencing a powerful weather front as it pushes its way toward the Midwest. The Sierra Nevada Mountains in California may get as much as 3 feet of snow. Winter storm and blizzard warnings apply from California to Nebraska and Kansas, says the National Weather Service.

Oddly, Sacramento got about one-tenth of an inch of snow on Monday morning. It was the first snow since 1976. Other places like Danville in the East Bay Area got rare overnight snow.

"It's fun," said Tahra Cyr, 37, of Danville to the San Francisco Chronicle. "It's too bad it's not going to last longer, because the kids want to go play in it after school."

The Sacramento Bee reported that the Dec. 7 temperatures are the coldest since temperatures have been recorded by the National Weather Service.