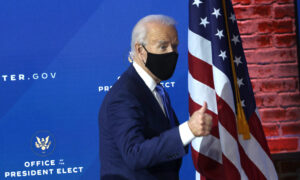 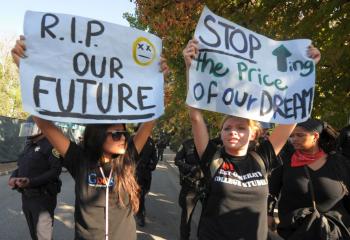 Student protesters hold banners outside a police line during a protest against an increase in student fees at the UCLA campus in Los Angeles on Nov. 19. (Mark Ralston/AFP/Getty Images)
US

Print
The furor that followed last Thursday’s vote by the University of California's (UC) Board of Regents to increase fees by 32 percent over the next two semesters, appears to be settling.

Some initially hailed the increase as the death of public education and rallies and protests erupted on campuses across the state, as well as a university-wide call to strike.

“In order to enact change, we need to try to understand the situation and hold the right people accountable,” said Ms. Ohura in the article.

The column placed blame for the budget short fall on poor administration, but added, “We need to stop complaining about the issues and make it so that the government is on our side. In order to fix a political problem, we need to fight in a political way.”

“We either raise fees so that you can have reasonable-sized classes, get access to the courses you need … or you’re going to see this institution deteriorate,” Mr. Yudof told the Daily Bruin.

UC needs to close a $1.2 billion dollar budget gap, created by the loss of state funding. The fee increase is the latest step in efforts to get the university out of the red zone. UC has been cutting pay and furloughing employees. To date, the university has laid off some 2,000 employees, canceled many classes and reduced student services such as open library hours.

Yudof said that while there is no way to avoid the cuts, those students whose family income is less then $70,000 dollars per year will not have to pay the increased fees.

In a further effort to make education accessible, the university has also announced Project You Can, a statewide push for all 10 UC campuses to fundraise $1 billion dollars from private sources that will fund scholarships and fellowships.