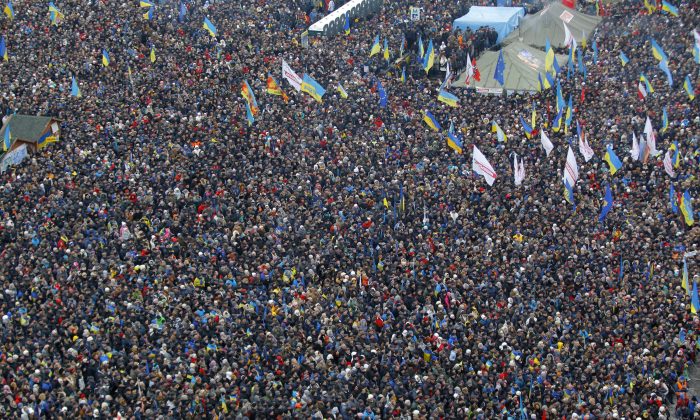 US threatens sanctions if authorities turn to violence
By Alina Varfolomeyeva

KYIV, Ukraine—Around 200,000 anti-government protesters gathered on the central square of Ukraine’s capital Sunday in a dramatic show of morale after nearly four weeks of daily protests. Joining them were U.S. Sens. John McCain (R-Ariz.) and Chris Murphy (D-Conn.), expressing support for them and their European ambitions.

Speaking at the rally the senators threatened sanctions against the government of President Viktor Yanukovych if authorities use more violence to disperse the protests.

“We are here because your peaceful process and peaceful protest is inspiring your country and inspiring the world,” McCain told protesters. “Ukraine will make Europe better and Europe will make Ukraine better.”

The protests began Nov. 21 after Yanukovych announced he was backing away from signing a long-awaited agreement to deepen trade and political ties with the EU and instead focus on Russia, and have grown in size and intensity after two violent police dispersals.

A resolution proposed Friday by Murphy, Chairman of the Foreign Relations Subcommittee on European Affairs, and three other senators, including McCain, calls on the U.S. to support a peaceful and democratic solution to the crisis. The resolution also calls for political prisoners to be released, and possible sanctions if further violence is used against protesters.

While President Barack Obama has not commented on the ongoing protests directly, Vice President Joe Biden called Yanukovych Dec. 9 to express concern over the use of violence.

Just like the response by U.S. officials, many of those supporting the protests in Ukraine itself came out after riot police used force in an attempt to disperse protesters.

According to a survey done by the Kyiv International Institute of Sociology, 70 percent of protesters say they joined after a police crackdown on protesters Nov. 30. At the time, the protests had been going on for just over a week. Riot police detained 35 protesters and injured dozens.

According to the study, half of the respondents said that they want conditions of life to change in Ukraine.

“I came out on the first day after the 30th of November, when they beaten children,” said 65-year-old retired Vira Sodomis, holding a Ukrainian flag and walking slowly through the crowd of protesters.

“The most inspiring is that many young people came out, students came out. And this protest is not really political—students want to live in a free country, they want to be in the EU, but to live in Ukraine. They do not want to have to leave their country,” Sodomis said.

Protesters on Maidan Nezalezhnosti square in central Kyiv, known as Euromaidan, have surrounded the area with makeshift barricades and a small village of protesters has formed, where young and old, from different regions of Ukraine, are staying.

They fear the possibility of night attacks by the Berkut, Ukraine’s riot police. Messages sent out on social media by the protesters each evening talk about the threat of a possible crackdown, and ask for more people to stay overnight at the square.

Last Wednesday, thousands of Berkut’s descended on the square in an attempt to end the protests.

Despite the fears, the atmosphere at the protest camp is friendly and optimistic. Volunteers at the site cook food, provide free medical help, and give lectures on civil rights and democratic freedoms.

Politicians and activists give speeches, and musicians from different countries provide entertainment.

Everything that is done at Euromaidan is done for free. Medical workers, who wear vests with crosses on them, go to the site after finishing work at the hospitals.

“We are on duty here when we have time free from work and everything else. We do not know how it will end, but we know that we must do something,” said Lyudmyla Yanyuk, a 40-year-old medical worker.

“We want the agreement association with the EU to be signed, we want this government to change, we want to live in a new country and a new system. The problem is not in Yanukovych, it’s in the whole system. We must radically change everything,” she says.

A much smaller demonstration of government supporters, about 15,000, was taking place about a kilometer (less than a mile) away from Kyiv’s Independence Square. Anti-government protesters have set up an extensive tent camp there and erected barricades of snow hardened with freezing water and studded with scrap wood and other junk.

Many people from eastern Ukraine, the country’s industrial heartland and Yanukovych’s support base, are against the protesters in Kyiv and want the country to have closer economic ties with Russia.

“We’ll become the slaves of Europe if we go into it,” said 43-year-old demonstrator Segei Antonovich. “Look at history—only union with Russia can save Ukraine from catastrophe.”

In the face of the protests, which present a serious challenge to Yanukovych’s leadership, Ukrainian officials this week renewed talks with the EU agreement and promised that they would sign the deal once some issues are worked out.

However, the EU’s top official on expansion issues, Stefan Fuele, cast doubt on the prospect Sunday, saying on his Twitter account that work is “on hold” and that the words and actions of Yanukovych and his government are “further and further apart.”

Yanukovych backed off the agreement on the grounds that the EU was not providing adequate compensation to his economically struggling nation for potential trade losses with Russia.

Russia, which for centuries controlled or exerted heavy influence on Ukraine, wants the country to join a customs union, analogous to the EU, which also includes Belarus and Kazakhstan.

The opposition says that union would effectively reconstitute the Soviet Union and remain suspicious that Yanukovych might agree to it when he meets Russian President Vladimir Putin on Tuesday.