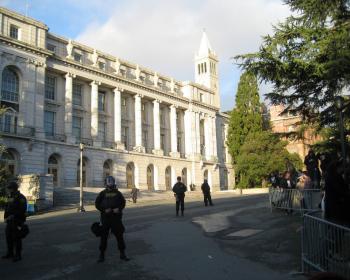 By Vicky Jiang
Print
BERKELEY, Calif.—Amidst rally cries, a crowd of several hundred students, faculty, workers, and union representatives gathered outside UC Berkeley's Wheeler Hall on Friday—beyond police lines. In protest of the University of California (UC) Regents’ recent decision to raise tuition by 32 percent for the Spring 2010 semester, 40 students had occupied the building. According to school officials, 3,800 students were unable to attend class in Wheeler Hall.

As part of the three-day walkout and strike that began on Nov. 18, students and union workers formed picket lines blocking entrance to the university. Fire alarms were set off continually in buildings all over campus to fuel the protest and rally support. The alarms at the main university library were set off so frequently that it was closed down.

Liz Perlman, a representative from the American Federation of State, County, and Municipal Employees 3299 (AFSCME), a union organization that represents custodians, said they had been on strike since 7:30 a.m. She was there to support the students' demand that the 38 service workers laid off due to budget cuts be reinstated.

“Protestors want to make their voice heard and be shown where they [the school administrators] are spending the money,” Perlman said. “As long as there are about 400 to 500 people out here, police will think twice before acting,” she added.

Many students support the walkout and strike. Matt Koh, a senior student majoring in Molecular and Cell Biology, was present at a march on Thursday. He said that although he agrees with the cause in principle, it it is unclear what exactly people are asking for and that they offer no specific solutions to the tuition increases, faculty furloughs, and worker layoffs, and no alternative in facing the budget crisis.

Berkeley police forces have surrounded the occupied building. Those inside are willing to negotiate with authorities only through an open window on the second floor. According to protestors outside, police refuse to negotiate unless the students inside open the locked doors.

Though she is not especially in favor of the occupation of Wheeler Hall, Smock is taking part in the protest to support her students, many of whom are “seriously engaged” in the protest.

Due to the California education budget crisis, UC campuses have faced cuts in classes, enrollment, student of color retention and enrollment, staffing, and academic services according to ucstrike.com, a Web site dedicated to the movement launched by several UC campuses since the first strike on Sept. 24.

Berkeley City Council Member Kriss Worthington was also present at the Thursday rally. He said that what the university is doing is “irresponsible to students and staff,” and that there is a need to, “get more organized and be more efficient in Sacramento.” In these tough economic times education is getting hit hard in California, Worthington said. He commented that university regents have not put enough pressure on the state and state legislators have not stood up to Governor Schwarzenegger enough to collectively resolve the budgeting issue.

At the end of Friday evening, the 40 students who occupied Wheeler Hall were cited for trespassing and released.