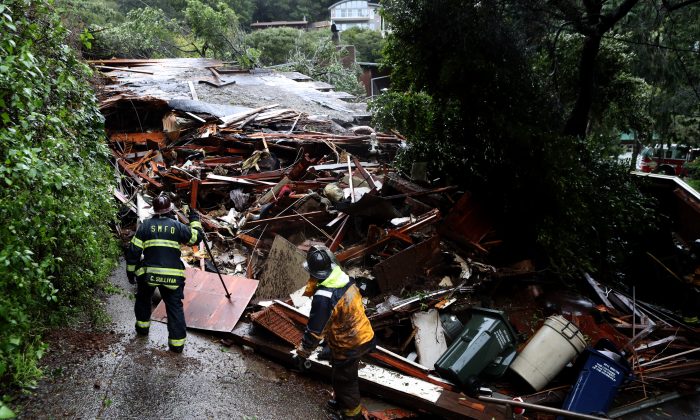 Southern Marin firefighters search a home that was swept down a hill by a mudslide during a rain storm on February 14, 2019 in Sausalito, California. 50 homes in the town of Sausalito were evacuated after a mudslide struck homes and sent at least one sliding 75 yards down a hill. No injuries were reported. (Photo by Justin Sullivan/Getty Images)
Southern California

The storm arrived in Southern California after leaving a trail of destruction in northern parts of the state and southern Oregon on Feb. 13.

During a 48-hour period, more than six inches of rain has been recorded in the mountain areas of Los Angeles County, where creeks and rivers have been flooded with muddy torrents, and roads were blocked by debris, according to the National Weather Service.

Mt Baldy Road being closed in the Village for a flooding situation. pic.twitter.com/l9yDmd7s6A

The Knott’s Berry Farm and Six Flags Magic Mountain theme parks were closed due to the inclement weather, which also forced the Genesis Open at Riviera Country Club in Los Angeles to be suspended for hours.

PGA WEATHER ALERT: Play of the first round of the Genesis Open has been suspended due to rain. pic.twitter.com/Jq8VjDZ3SB

Flash flood warnings were also sent out shortly after the rain hit the burnt areas of Riverside and Orange Counties, where rockslides and mudflows would have easily been triggered by the downpour.

Mandatory evacuation orders were given to the residents living in Trabuco Creek, followed by road closures, as concerns of mudslide and flash flood increased, according to the Orange County Sheriff’s Department.

Another picture shows that a road in the San Jacinto Mountains has been totally destroyed by the heavy runoff, which created a waterfall that is still eroding the soil beneath the road.

Update: SR-243, there are two closures in place. Hurley Flats to I-10, and at Saunders Meadow. pic.twitter.com/LUHRxHYwM2

In addition, record humidity levels in the atmosphere were observed in San Diego Thursday morning, which later filled the local rivers.

“The heaviest rain has ended. However, there will continue to be scattered showers across Los Angeles County this afternoon,” NWS reported. “Some of these showers could produce brief heavy downpours. There could still be some residual pockets of roadway flooding across the county due to the heavier rain earlier (Thursday).”

WATCH: The outer wall of a property in the Alvardo area in Lake Elsinore collapses into a rain-swollen creek. MORE: https://t.co/fro2ZFWJtr pic.twitter.com/IcHCQcS8K3

In addition, warnings were also given to people visiting local beaches in Southern California as contaminated runoff discharged into the ocean.

“Bacteria, chemicals, debris, trash and other public health hazards from city streets and mountain areas are likely to contaminate ocean waters at and around these outlets after a rainfall. Individuals who enter the water in these areas could become ill,” a statement from LA County Department of Public Health read. “Discharging storm drains, creeks, and rivers only comprise a small portion of the beach; therefore, anybody who wants to go to other areas at the beach can still enjoy their beach outing.”